How does the saying go, “You never forget your first?”

My return to Voiron to visit Bonnat felt like returning home after many years and seeing old friends. So much was familiar and so much was new. Of course, I had seen Stéphane and members of the immediate family – especially Elisa, my colleague on my projects down in Mexico – many, many times over the past 20+ years at the Salon du Chocolat in Paris and elsewhere, but seeing them all in their hometown brought many happy memories into strong focus.

Where the Heck Is Voiron?

Voiron is located in the Auvergne-Rhône-Alpes region of France, between Lyon and Grenoble in the department of Isère.

Lyon is noted as a gastronomic centre of France and specialities served in its traditional bouchons include Lyon sausage, sophisticated salami (known there as “rosette”), tripe, and quenelles. In the east of the region the food has an Alpine flavour with dishes such as fondue, raclette common, gratin dauphinois, and gratin savoyard.

The region is also famous for its poultry and the many varieties of cheese including Tomme de Savoie, Bleu de Bresse, Reblochon, Saint-Marcellin and Vacherin. [Source: Wikipedia.] And its chocolate, of course, with both Bonnat and Bernachon being highly regarded makers both in France and globally

The center of Voiron, (population about 20,000), is dominated by the church, which is depicted on the labels of Bonnat bars. On Wednesday and Friday mornings there is a really quite lovely market featuring produce, cheeses, charcuterie, live animals (chickens, roosters, and bunnies) and a flea market – all in the median of the main street of Voiron, the Cours Senozan. The Bonnat family has been at the center of Voiron, literally at #8 Cours Senozan, since the 1750s.

The Shop and Factory 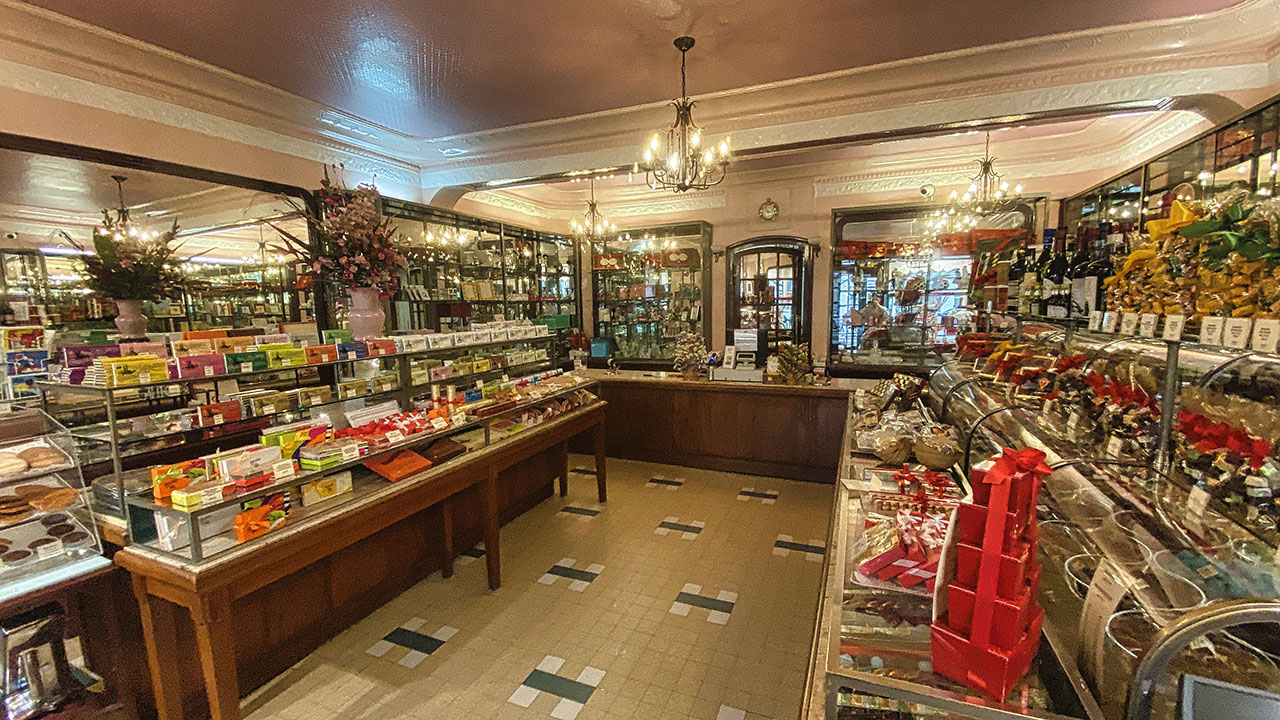 The family owns and occupies the entire building which houses some of the production. There is a group of other buildings surrounding a common alley with one where beans are inventoried (only those needed for immediate production, the bulk of the beans are stored offsite and trucked in as needed), another with the roaster and chocolate production (the machines are all painted Bonnat red), another for bar depositing, one for enrobing and chip depositing, and still yet another for wrapping (shown in action in the video below).

Of course, one of the great pleasures and privileges of visiting Bonnat is that everything is available for tasting. My final morning in the shop I left Voiron with a 1kg box of mixed pralinés (in the form of cremino-style wrapped cubes) and eight bars – one Selva Maya (Chiapas, MX bean origin) and a selection of Fantasie bars, show in the photo top left, from the top freeze-dried fig, freeze-dried raspberry, wild honey nougatine (with the honey from Bonnat’s own hives), and whole pistachio – a collaboration with two-Michelin-starred chef Jean Sulpice for his boutique Pere Bis.

There is also some great swag – fabulous souvenir tote bags decorated with the labels of many of Bonnat bars, and a porcelained metal plate for display at official purveyors of Bonnat products. (The plate is also available in a smaller size as a fridge magnet – if you are in the US or Canada let me know if you’re interested and I will see about getting a supply in. They’d be the equivalent of €10, plus shipping. 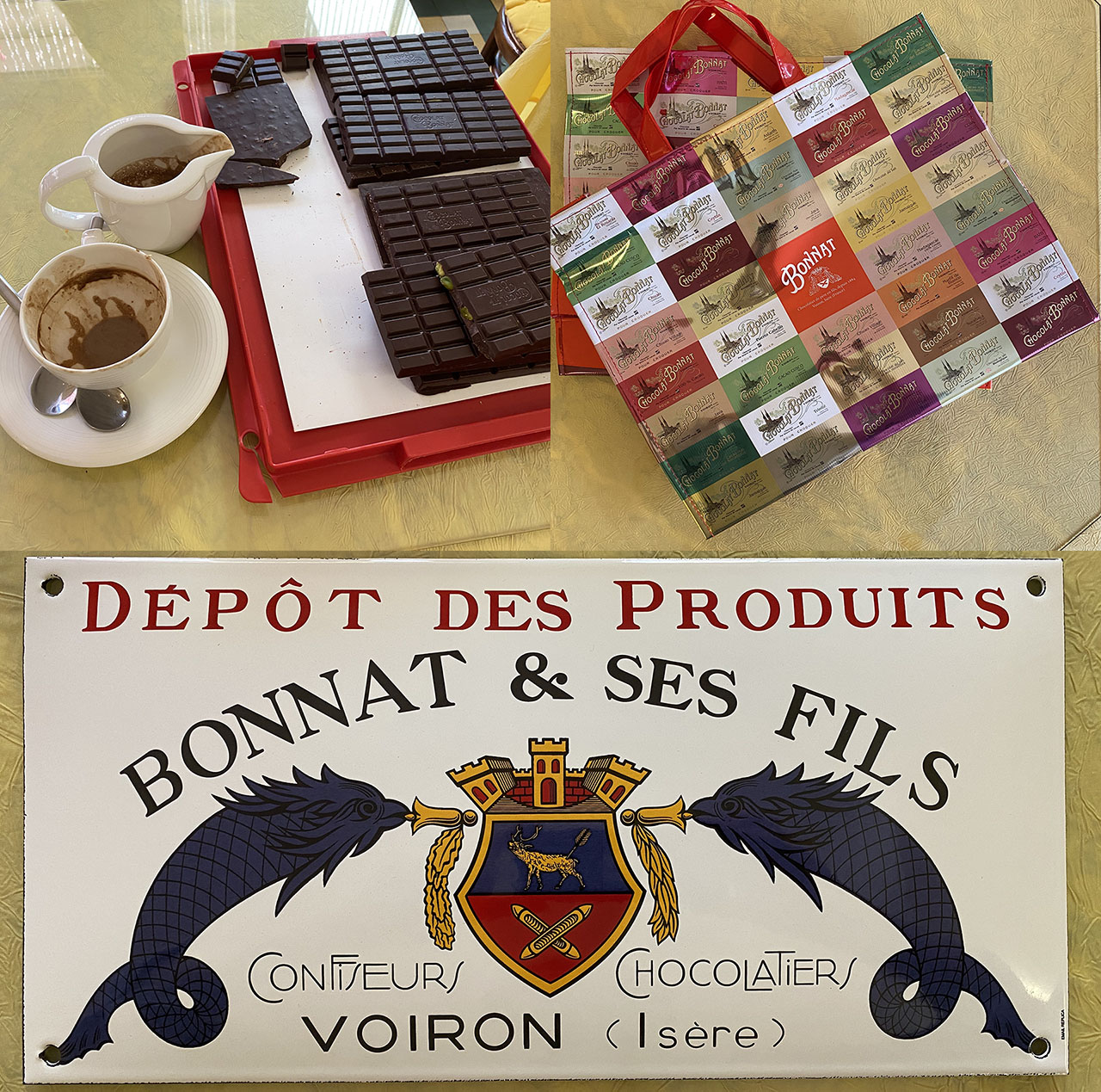 I don’t know why it took me 22 years to return to Voiron and why I stayed for just one and one-half days and two nights – I know it won’t take anywhere near that long for me to return. There are ambitious plans for a new factory (patisserie production and the boutique will remain where they are) on land about a ten-minute drive from the current location. It is a beautiful spot with a pretty stream and space to plant heirloom fruit trees, including some cherry trees already in the ground. There are plans to display antique machinery in the spaces currently occupied by chocolate production. While in the works for some time, the museum will be an extension of the grant of recognition of Bonnat as a Living Patrimonie company in chocolate. There are 1500 companies recognized in this fashion by the French ministry of culture, with only a double-handful of them in chocolate.

I plan to return to Voiron for the grand opening of the new factory and to report back on what I see.

FBM Aura Tabletop Tempering Machine For Sale $4500 OBO This unit will continuously temper up to 10# of chocolate for hours. It includes a dosing nozz 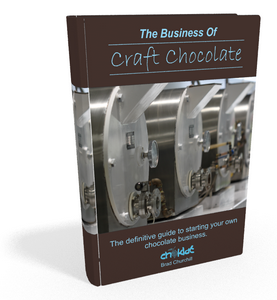