Maison Bonnat, one of the most highly-respected names in chocolate worldwide, announced today the opening of its first new location in France outside its hometown Voiron (Isère)§.

The new shop is situated at 189 rue du Faubourg Saint Honoré in Paris’ 8th arrondissement within easy walking distance of the Arc de Triomphe, and features a complete selection of bars as well as signature bonbons and cakes. 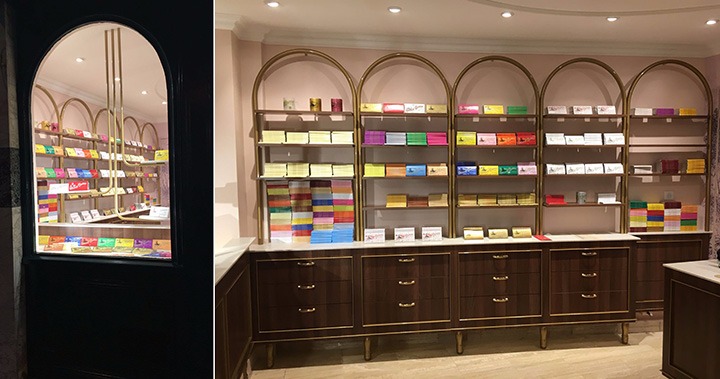 The Bonnat family has been making chocolate from the bean since 1884.

§ Bonnat’s first store outside of Voiron, located in Tokyo, was closed after a series of earthquakes rocked Japan between March and August, 2011.

Archived Comments
Thank you @Alyssum_Paris !! I have a feeling it won’t be “either/or” location, but “in addition to…” Can’t get enough of JG!
@Alyssum_Paris – Thanks for letting us know about the new location. I walked down the rue de Grenelle and then up the Blvd Raspail so just missed it! I will add it to my list for the area for my next visit.
@Keith_Ayoob — There is a newish second Jacques Genin shop at 27 rue de Varenne, just off rue du Bac. @DiscoverChoc can add it to the rue du Bac list 🙂
@Keith_Ayoob – did not mean to omit Genin … there are so many in Paris to consider! However, IIRC, there is just the one Genin shop on the rue du Turenne up from the Place de Vosges on the other side of the Seine from Saint-Sulpice.
@CocoaGal and @DiscoverChoc — don’t forget Jacques Genin. Terrific pastries and incredible caramels as well, made upstairs (and I’m not that much of a caramel person but these are insane and always fresh). As for Maison Bonnat, I absolutely cannot wait to try this shop. Been a fan of his since my first taste. I’ll probably buy all the bars with at least 65% and the Green Chartreuse and other truffles are probably going to take up serious space in my luggage. Thank you for this alert.
@CocoaGal – This is a great list. Your observation about the Rue du Bac is very good, but I would move the epicenter of a left bank chocolate tour slightly – to Saint-Sulpice.

Michalak, Herme, Café de Flore (hot chocolate), Marcolini, Lahrer, Mulot, Chapon, and Roger – and more – within a hundred meter or so radius are worth visiting. Within easy striking distance are Richart, Aoki, Masse, and many others, in addition to Le Roux which you’ve already pointed out.

While you’re in the neighborhood you’re not far from one of my favorite museums in all of Paris: the Musée Rodin. On a warm spring day the house and gardens are simply magical, I find.

Since I’m a pastry chef and a chocolatier, I’ve included a couple of pasties shops where you can find chocolate pasties:

Le Bon Marche for a wide variety of chocolate bars.

Henri Le Roux- the original creator of THE sea salt caramel! Try their salted caramels but don’t miss their chocolates.

Pierre Herme- the “it” place for French macarons. Skip the traditional flavors and go for whatever the weirdest sounding seasonal ones are. He’s a master at savory sweet macarons.

Walk down the street on Rue du Bac and you’ll hit a bunch of chocolate and patisserie shops within two blocks of each other.

Trivia – other famous products made in Voiron are Yellow and Green Chartreuse. Bonnat makes signature Chartreuse bonbons that, even if you are not a fan of Chartreuse, you do need to try.
Next Post

The hunt for the best chocolate chip cookie. IMO, a very worthwhile pursuit. What's you're favorite…