OK, I admit this is a somewhat whiny piece, but it’s a real pet peeve of mine.

Bought a couple of bars at the airport in Ibiza, both 70%, one with fleur de sal from Ibiza, from Trinitario beans from the Dominican Republic and “a Caribbean Island,” and the other a straight 70%, no origin stated. The “best by” dates were both well into 2018, so I figured all would be good.

Once I opened up the wrapper of the fleur de sal one. It looked a bit grainy. The bite was a little too crisp and the mouth feel a little too grainy, almost powdery. and the underside showed some bloom. Taste wasn’t ruined but the experience wasn’t what the maker intended, I’m sure. I don’t want to hang the maker — ChocoLate — as the bar should have been good for many months, and this didn’t seem to be how the bar left the place where it was made.

This isn’t the first time this has happened. Once in a shop at London, Heathrow, I got a single-origin bar at one of those uppity gourmet shops, paid about 8 pounds, opened it up and it was more than bloom — this hing was just spoiled. The wrapper had adhered to the bar, as though it had been melted and re-solidified. Well within the “best by” date by at least six months. Since I’d just p[aid for it and opened it there, I brought it to the attention of one of the staff, who said, “Oh, that’s a fancy bar. That’s the way it’s supposed to look.” The manager saw my side and gave me a refund.

As for the stuff you might get in the duty-free shops, such as novelty bars with tourist attractions of the locale on the label, as well as the mass-market brands, this may not be high-end chocolate, but the same brand bought at the airport seems to be of lower quality than the similar item from a standard shop in town. I’ll pass, thanks.

Note that I did manage to get through the fleur de sal bar (it’s only 50 grams and “any port in a storm”, since Formentera is too tiny to support a even a cinema, let alone a chocolatier) but — note to self — BYOB (bring your own bars) and avoid airport chocolate like the plague.

I’m off to Buenos Aires soon so expect a post on “Chocolate in Buenos Aires”. And I’m BYOB just in case. 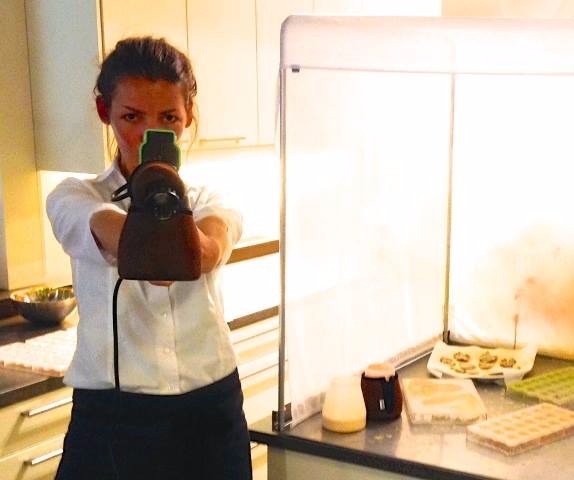