The summer edition of the Specialty Food Association’s Fancy Food Show took place June 23-25 in the immediate aftermath of the Fine Chocolate Industry Association’s Summer meeting in NYC. For me, an intense five days of chocolate and food-tasting activities and meeting up with friends and colleagues.

I’ve been attending Fancy Food Shows (FFS) since the summer of 2001, where I first met Frederick Schilling, one of the founders of Dagoba Chocolate – exhibiting at their first FFS.

2019 marks a span of eighteen years and when you add in the Winter show in January in San Francisco, I have probably attended about 30 Fancy Food Shows, all in.

As I think about that number I don’t know what I feel about it. Is it something to be proud of, or is it a sign of some obsession? Whatever the answer to that question ends up being, attending that many shows over such a long period of time means I have a perspective on the industry and flavor trends possessed by a relatively small cohort of the chocolate community.

For as long as I have been attending FFSs, they could have easily been renamed the Fancy Cheese Show and this show was no exception to this observation. The long-term trend is in the increased diversity of cheese types being represented. While Parmesan and related aged Italian cheeses seem to dominate, that dominance is waning when you pay close attention. One trend in cheese I abhor is an increase in single-serving offerings, which means a higher ratio of packaging to edible cheese.

For the last couple of years, the FFS could also have been called the Fancy Jerky Show because of the presence of meat jerkies in all shapes and flavors (not to mention sausages in many forms from many cultures). While there was still a lot of sausage at this show, the jerky category has almost disappeared. Biltong from S Africa was represented the strongest, with vegan jerkies coming in a close second. No Evil brand was my personal favorite vegan jerky at the show – the only vegan jerky products I would willingly spend my own money on.

Tea in many forms from loose-leaf to bagged to ready to drink has long been a huge category but the short-term tea trend has been and is matcha in many forms including pre-measured sachets and both culinary and ceremonial grades. This past January, if my memory serves me correctly, most of the high-grade matcha companies were in the Japanese pavilion and at this show they appeared to be spread out across the entire exhibit floor. 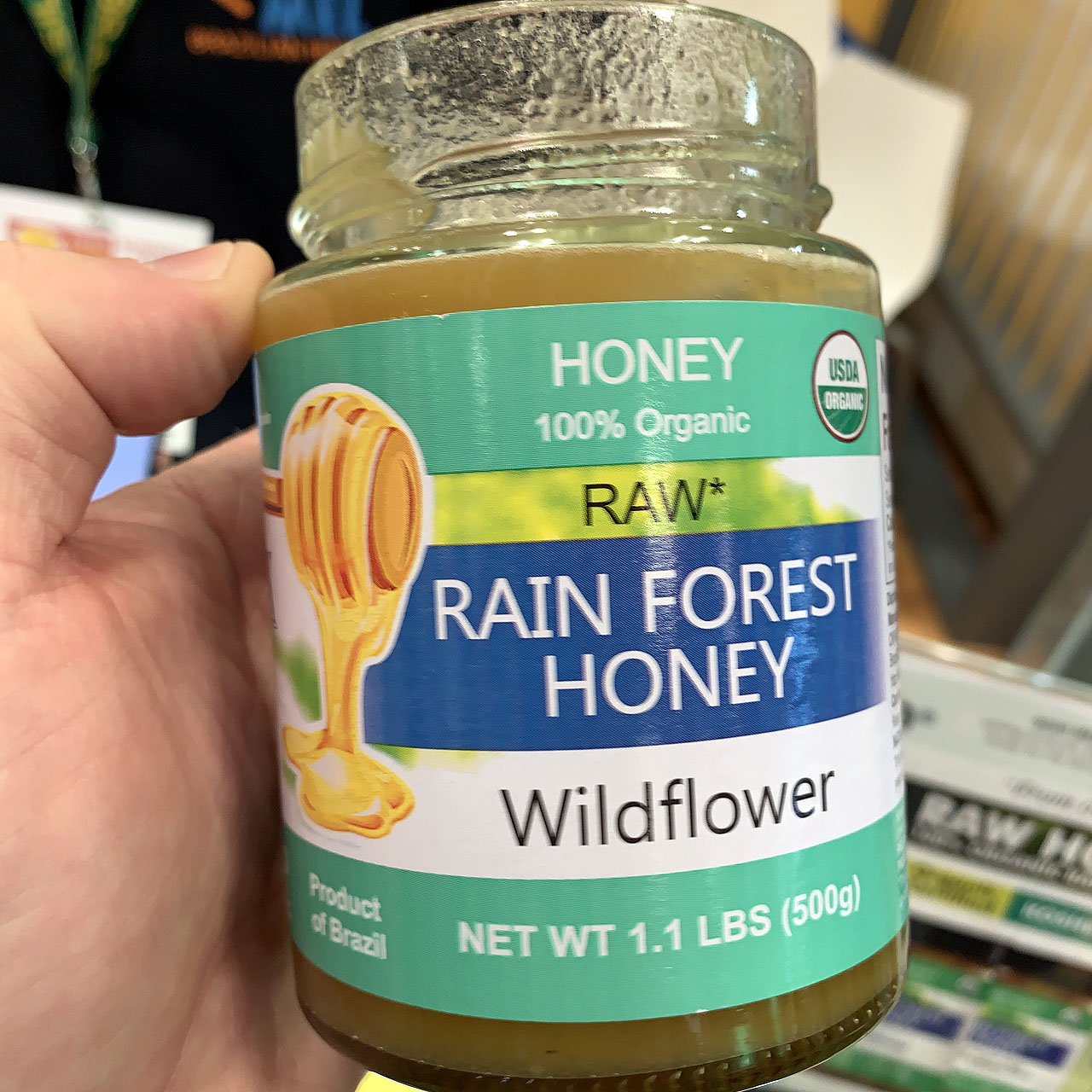 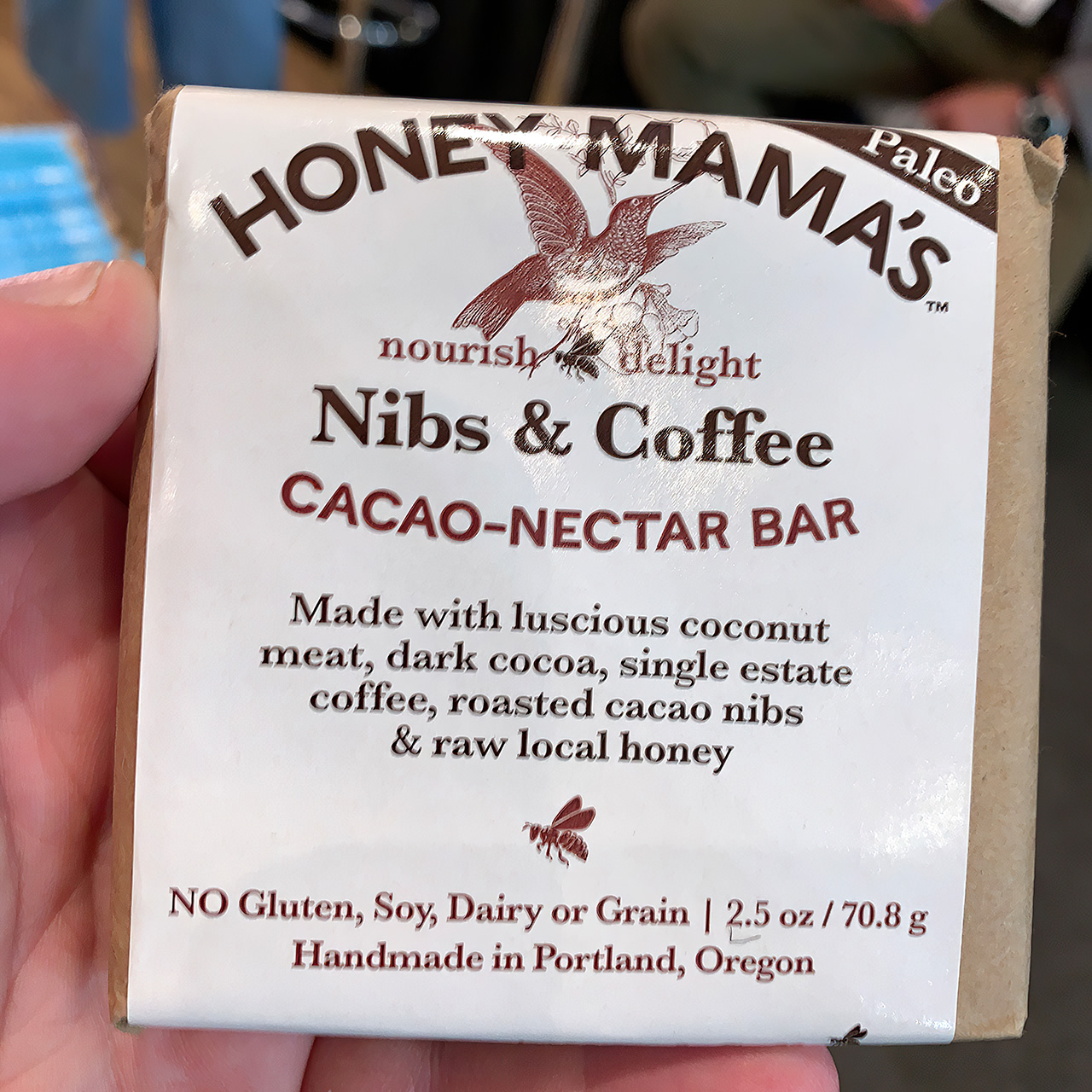 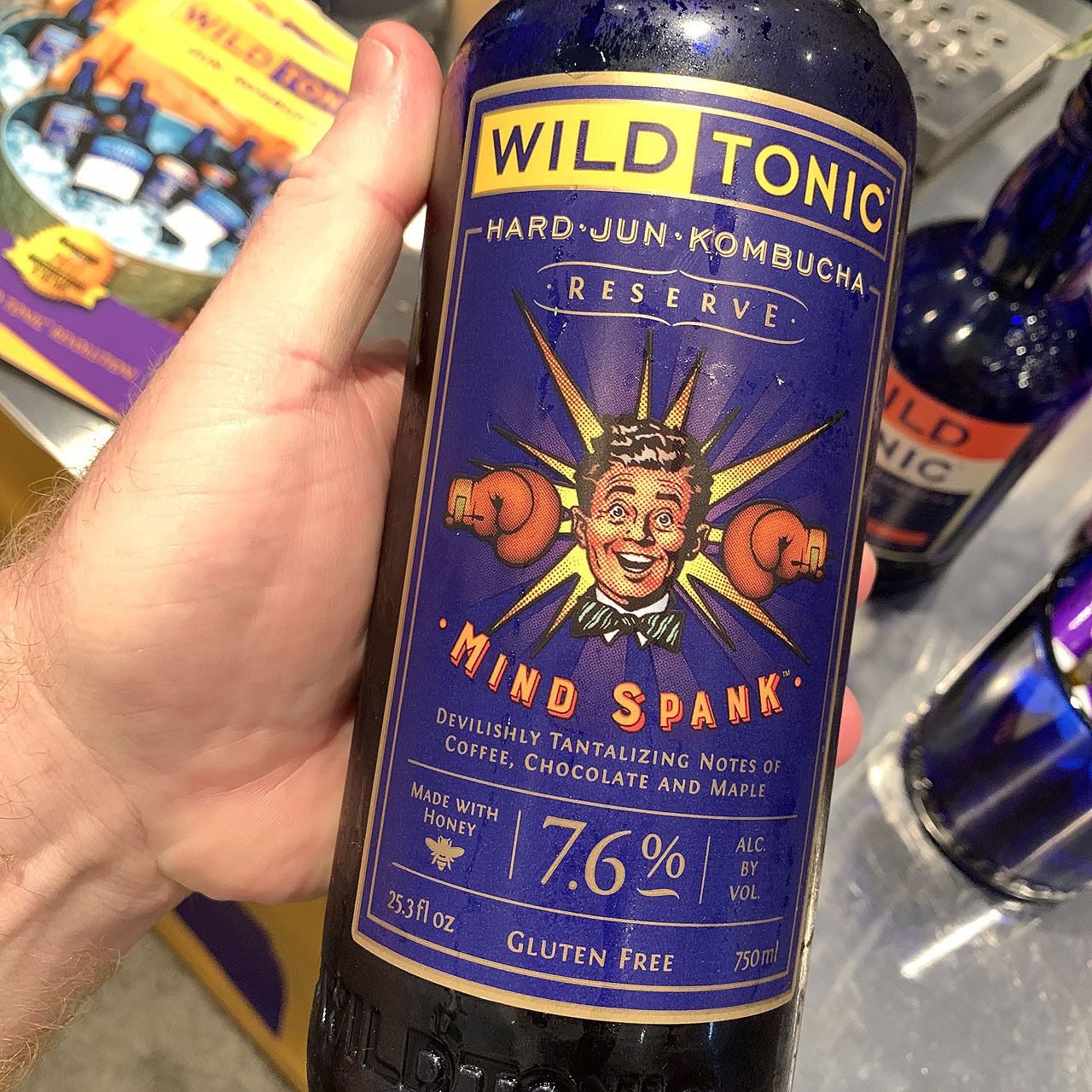 As a category, chocolate – or more accurately chocolate candy/ confectionery – has always had a strong visible presence at the FFS. Guittard is one of the few large chocolate makers that has had a continuous presence. Other large companies have come and gone, and news ones come (this year, notably Casa Luker from Colombia), but it will remain to be seen if FFS is a good sales venue.

The country pavilions from South America (esp Peru and Ecuador) include small makers looking for US distribution, but it is rare to find small makers from any of these countries on their own stands – with the possible exception of Pacari. Even small American makers come and go – I can’t recall a single one that has a had a regular presence of the course of several years. 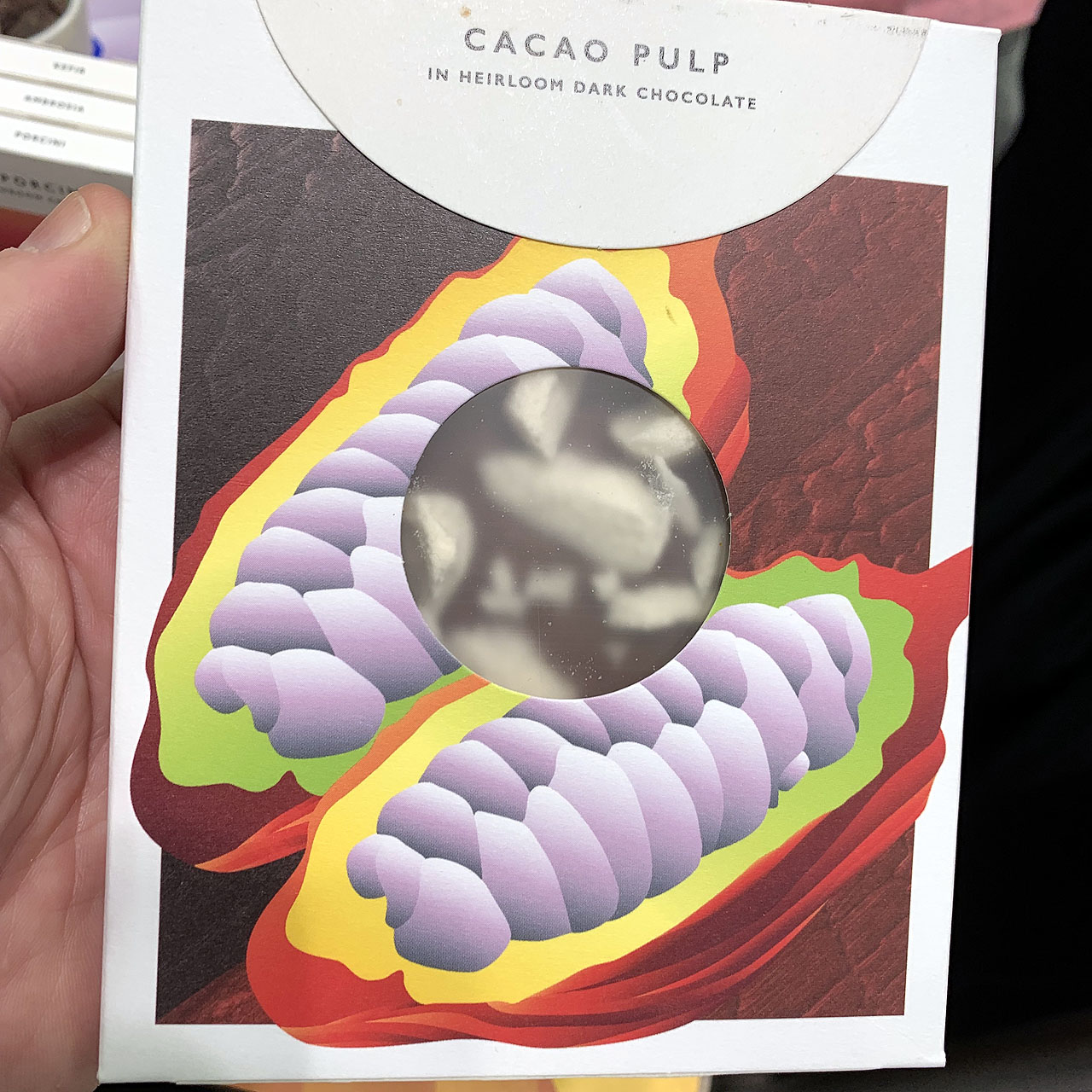 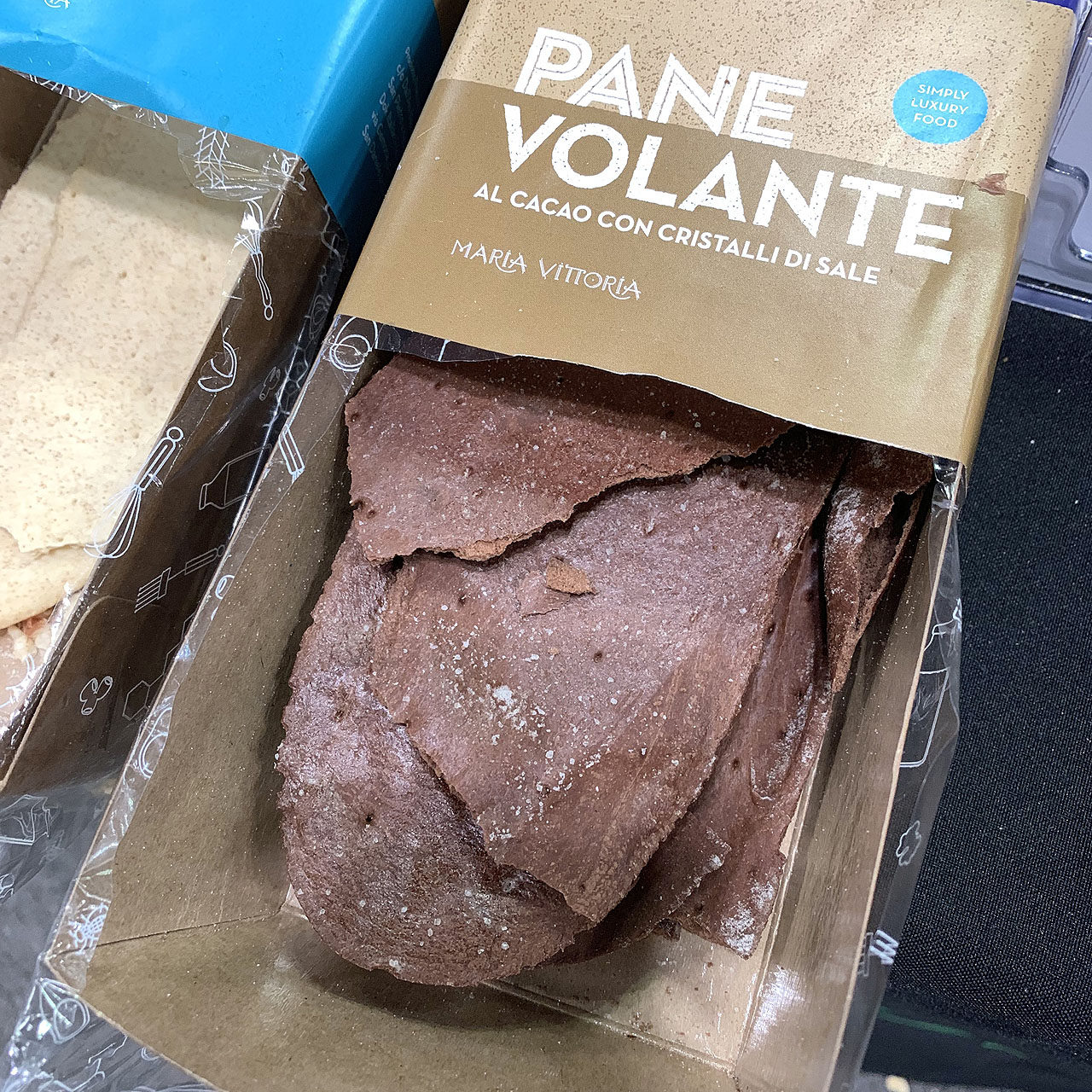 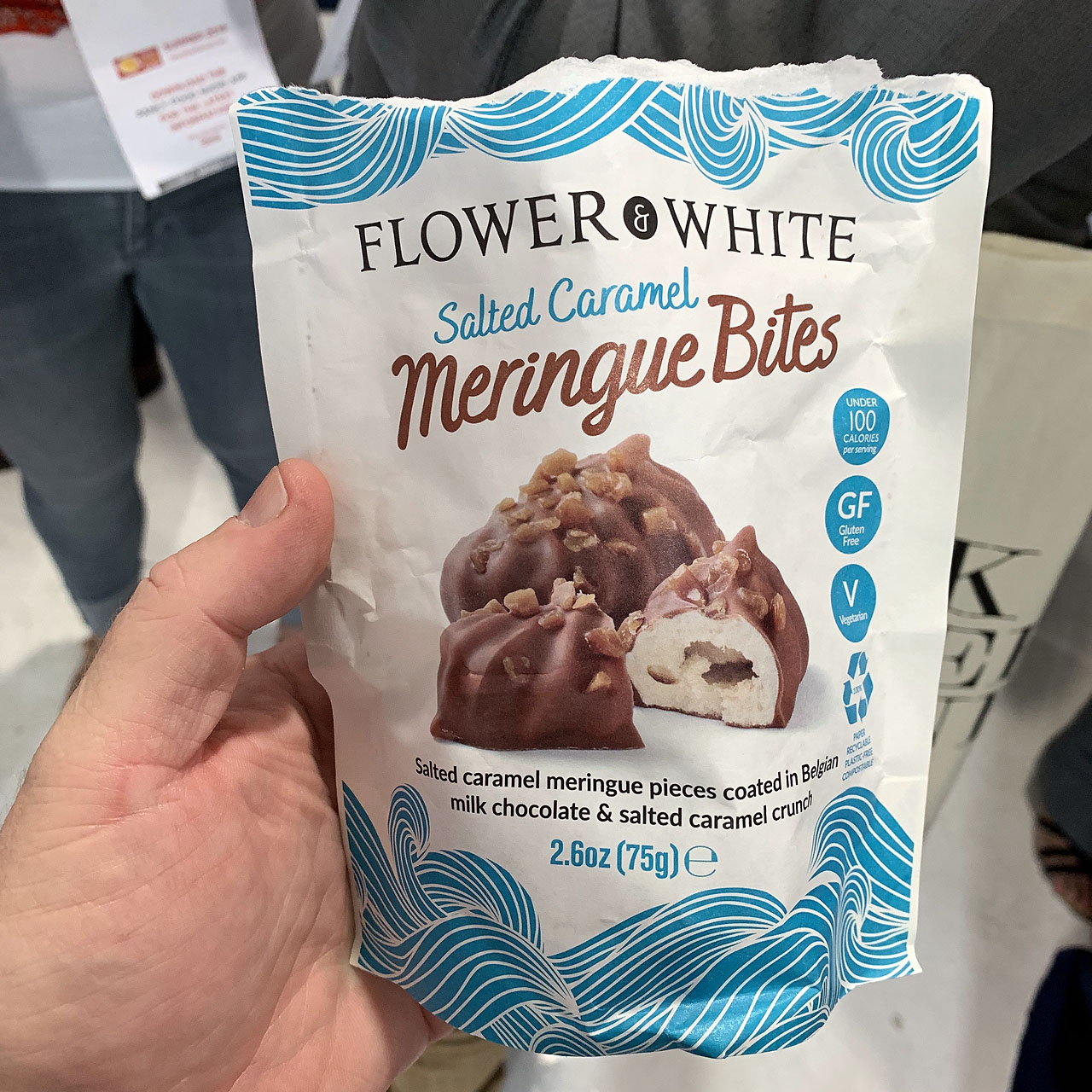 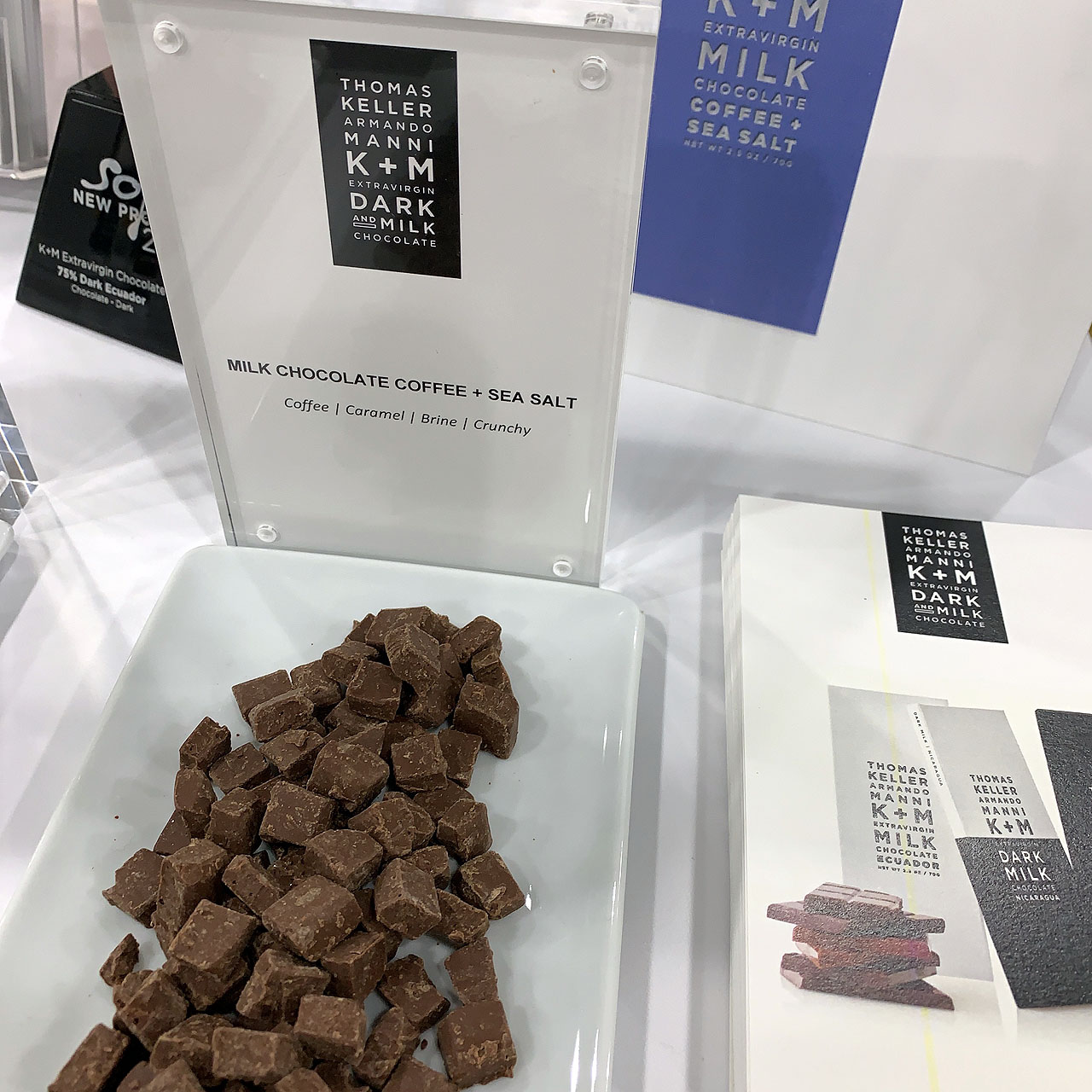 Most of the action in the small maker category, globally, can be found in the A Priori stand, which features a rotating collection of makers presenting their products as well as dozens of brands on the back wall. This year, presenting makers included Mirzam (from the UAE), Pump Street (UK – I am a huge fan of their bread crumb inclusions, especially in beer pairings), and Naive (Lithuania).

The Naive bar shown had an inclusion of freeze-dried cocoa pulp. When I was working on Solbeso we calculated that something like 400million liters of pulp and juice were discarded every year. I personally think that one way to diversify at the farm level is to focus on pulp and juice, not just seeds, so it’s nice to see this bar from Naive (who has a history of making interesting bars) though I think the marketing language about this specific bar is a little over the top.

I also like to see chocolate (and cocoa) appear in non-traditional forms. Years ago I had a duck ragu over cocoa pappardelle at an Italian restaurant here in NYC and I have wondered since then why more people don’t use cocoa as an ingredient in pasta. The Pane Volante (which translates as flying bread because of the winged shape) crackers are a great example of that. Tasty and light and crisp – I can easily many ways to incorporate these into tasting and pairing events and for just plain snacking.

My friend Kees Raat makes and sells meringues at Metropolitan in Amsterdam and we’ve experimented with chocolate meringue and cheese pairings with Betty Koster of Fromagerie l’Amuse. For me, it’s all about the texture of the meringue, the way it collapses as you bite down on it and the way the texture changes as the moisture in your mouth interacts with the sugar/egg foam. The meringue bites from UK-based Flower & Sweet hit my notion of texture balance spot on. Covered with chocolate and then salted caramel?

If any of you have read my thoughts on Keller+Manni you know that I am not a fan of the way the company labels and markets its products. This is because, legally, olive oil should not be allowed as an ingredient in chocolate – according to my understanding of the regs. You can call it olive-oil flavored chocolate, or chocolate flavored with olive oil, but they should not be able to call it chocolate because olive oil is not on the list of approved fats. Technicalities aside, the dark-milk with coffee and sea salt bar pictured is actually the first product from the K+M collaboration that I would buy a second bar of.

Without a doubt, the silliest new product category is, IMO, [ drum beat ] collagen water. There were at least two stands offering this up. My prediction is that while there may be more than two companies offering this up at Winter FFS 2020, by Summer 2020 FFS this category will be on the decline – as a fancy food offering. Maybe nail salons? 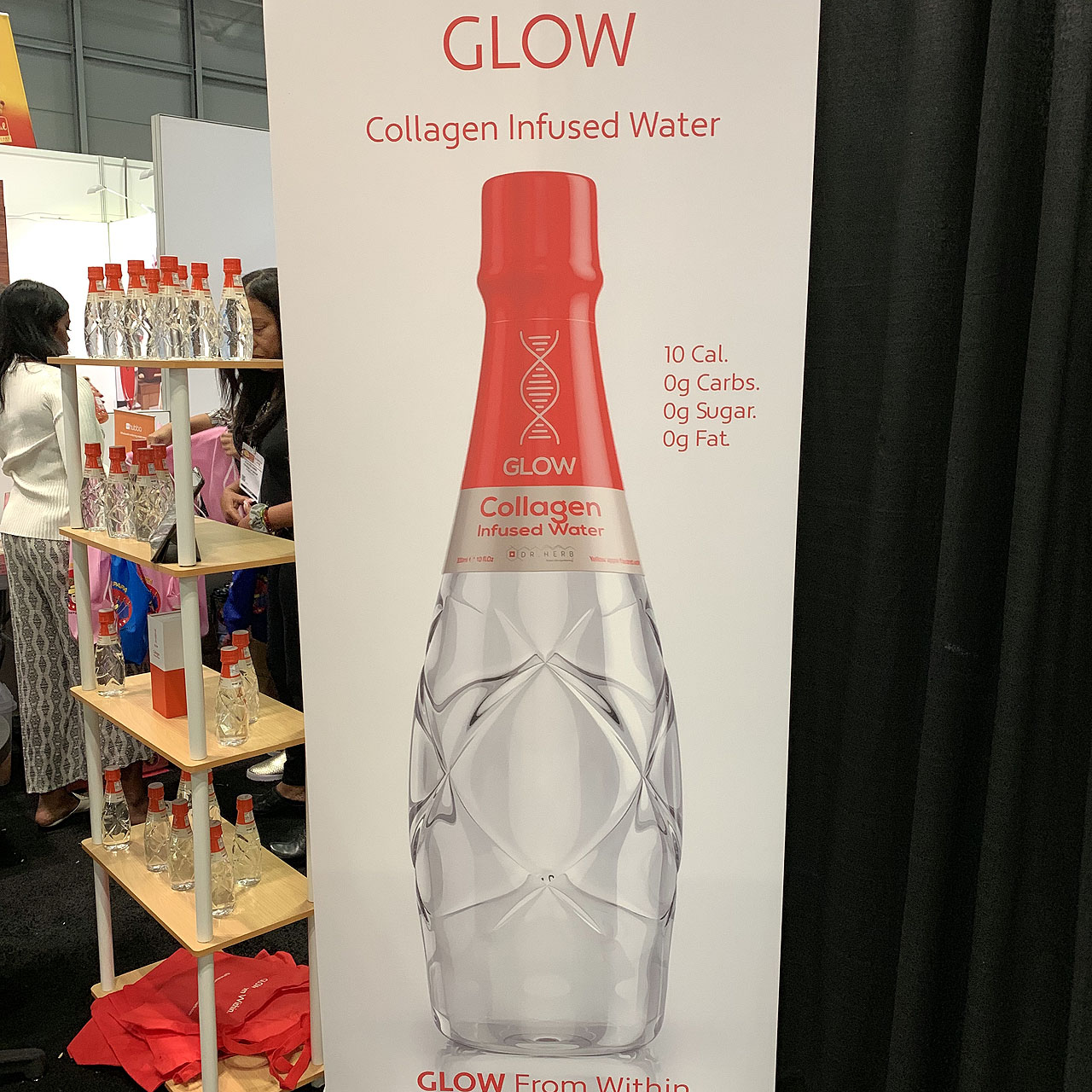 My favorite product at the show were these watermelon chips. Just one ingredient (watermelon with the seeds), sliced thin (and maybe pressed) then baked. 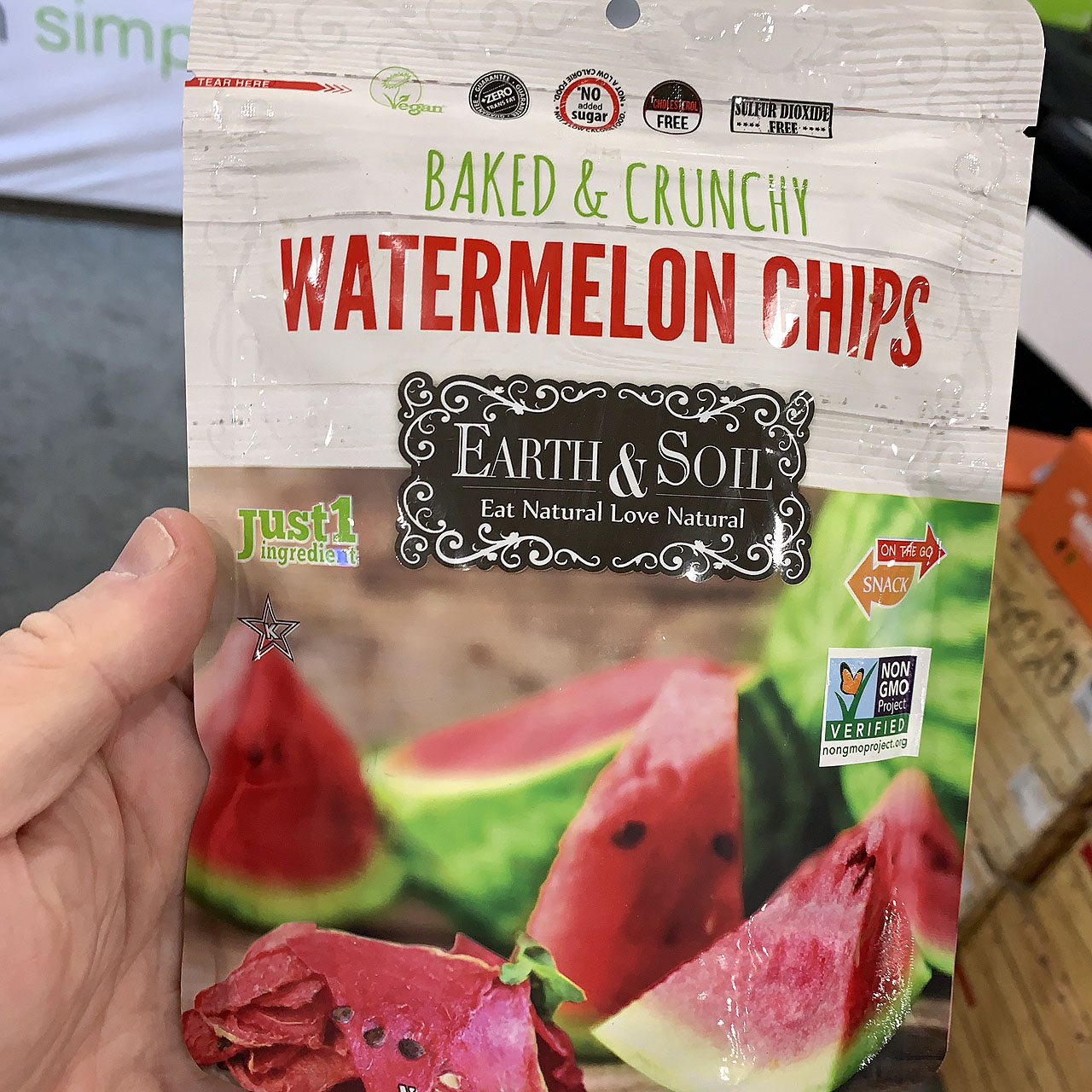 In a word? Addictive.