Cocoa content in a chocolate refers to the total percentage of the ingredients that come from the cocoa bean. This includes the cocoa liquor or cocoa mass made from grinding up cocoa nib, plus any added cocoa butter.

One of the most common misconceptions in chocolate is that 70% is a magic number, that somehow chocolate above 70% is magically better for you or that chocolates above 70% are automatically bitter. Despite what you’ve read or heard …

There is zero direct correlation between cocoa content and healthiness or bitterness or any other qualitative assessment of a chocolate.

Percentage cocoa content is a quantitative measure, so the only thing you know when you know the cocoa content of a chocolate is about how much sugar there is, and even then the correlation can be loose.

With a typical two- or three-ingredient dark chocolate bar (cocoa beans/mass/liquor, sugar, cocoa butter) the percentage will tell you how much sugar is in the chocolate. That’s all. Generally, chocolate makers don’t (and many small chocolate makers often can’t) disclose how much of the cocoa content of their chocolate is the non-fat solids – what we think of as cocoa powder – and what percentage is fat (cocoa butter). The only way to figure this out is if there is nutrition facts label. You have to take a look at the total number of calories from fat in a serving and the size of the serving to calculate the ratio. And it’s likely an approximation or average.

When you start adding in other ingredients – vanilla, lecithin, milk, etc. – the cocoa content all on its own reveals even less. In a 33% cocoa content milk chocolate, the other 67% is split (mostly) between sugar and milk. Again, you have to go to the nutrition label and take a look at the added sugars entry to calculate the sugar content, and even that’s an approximation because of the lactose (milk sugar) in the recipe.

A good way to think about cocoa content is to compare it with alcohol proof.

The only reason an 86-proof vodka is automatically better than an 80-proof vodka is if it’s the same price or less expensive and your sole reason for drinking is to get drunk.

Similarly, cocoa content tells you nothing about the variety used to make the chocolate, if the trees were healthy and the seeds were at their best when the pods were harvested, the care taken during fermentation and drying, and how the beans were roasted and the chocolate conched, to name just a few of the steps that go into determining the flavor of a finished chocolate.

Cocoa content tells you none of that. One really good example of how confusing this can be is Zotter’s 80/20 dark milk chocolate. It’s 80% cocoa content, but the 20% is milk – there is zero added sugar other than what’s in the milk. Plus, different sugars have different levels of sweetness so the same recipe made with different sugars will likely taste very differently. And some sweeteners, such as coconut blossom sugar, have distinctive flavor profiles of their own.

Archived Comments
I will have to go look for the Marie Belle bar – I did not know about it.WRT Montezuma the tea analogy only works, for me, if he was drinking an infusion made from shell. He (reportedly) was drinking comal-roasted beans which where shelled and the nibs then ground on a metate. So, not a tea at all. I don’t know if there is a non-technical word for that.
MarieBelle has a 70% bar sweetened only with milk powder. It’s good. A little sweeter than the Zotter, given that it has less cocoa.

It’s funny — when people cringe at a high cocoa percentage, it’s probably because they just have an expectation of something sweet. They don’t have that expectation when they also like their coffee or tea black and unsweetened.

Oh — and yes, I meant “always” to mean the “modern” always. I think it was Montezuma who was said to have consumed some huge amount of hot chocolate, unsweetened, and dairy-free. My other half considers this more of a “tea”. At any rate, with all those theobromines every day, it’s a wonder he got any sleep. ;

@Keith_Ayoob –I deliberately used weaponized to see what kind of responses it might elicit. I don’t necessarily agree that chocolate has _always_ been a sugar delivery vehicle but that’s certainly the case since the at least the 1870s. Not as sure of sugar content of recipes prior to the 1840s.

As for the mis-quoting of Chef Torres. It is. The entire context of the quote is about dark milk if you watch the video. Most people won’t. The actual quote is closer to, “*Dark MILK* chocolate is a milk chocolate that contains over 50 percent cocoa contents and very little sugar.” I don’t that I would say very little sugar but certainly less sugar than a plain dark chocolate of the same percentage. I also have to disagree about the arbitrary percentage definition. Felchlin makes a very good 49% dark milk chocolate. As the legal definition in the EU for milk chocolate is 33%, I would say dark milks start at 35% at the very low end.

As for the Zotter 80/20 bar … I don’t know anyone else doing a dark milk with no added sugar, just added milk.

Many thanks, @DiscoverChoc for the info about added cocoa butter.Re: the “magic 70%” number – that’s just what much of the research used. I’m guessing that it’s what they reasoned was a percentage that was high enough to make a difference and low enough to keep the majority motivated and happy. A huge amount of the research in the past was actually done with Dove (M & M Mars) even when Mars didn’t fund the research.

Re: Chef Torres, the CNBC comment about dark chocolate being a milk chocolate MUST be a misquote. He’s a smart guy and media misquotes are not impossible, especially by writers not very familiar with the subject. (I wonder if CNBC fact-checked with Chef Torres.)

Here’s where I might both agree and disagree with you: Chocolate has ALWAYS been a sugar-delivery vehicle, so I cannot say in earnest that it’s being “weaponized”, except that sugar is undergoing a demonization period similar to that which other calorie sources also have in the past ,rightfully (as in trans fats) or wrongfully (monounsaturated fats).

Less sugar is something I’d never argue with, and this is especially important for diabetics and others who are insulin-resistant. For the purposes of general weight management, replacing the added sugar with more cocoa and milk powder won’t change the calorie content, nor will replacing sugar with sugar alcohols like maltitol, erythritol, etc. All this is to say that, at least for the purposes of weight management and eating a healthful diet, dark chocolate can fit nicely.

So can nuts – which are healthy but also high in calories (ounce-for-ounce, they rival chocolate) but much more than an ounce or two of chocolate (or nuts), and I’d start to wonder what it’s replacing.

For the record: I’m also a huge (really huge) fan of the Zotter 80/20. I like the level of sweetness and the flavor notes that come from the milk powder. It would be good to do a whole side-by-side tasting of “sweetened only with milk powder” bars.

From an article recently posted on CNBC – “Jacques Torres: Not all dark chocolate is created equal, and here’s why”When Chef Torres says, “Dark [chocolate] is a milk chocolate that contains over 50 percent cocoa contents and very little sugar” he is so wrong at so many different levels that it hurts. BUT, this statement is either a) a serious misquotation of what he actually said or b) it is revelatory of a profound lack of understanding of fundamental definitions on his part.

Here is the link to the article in question:
https://www.cnbc.com/2018/03/30/jacques-torres-not-all-of-easter-dark-chocolate-is-created-equal.html

_You have to watch the video to see what he actually said, not what is quoted._

As I write in the OP, the only thing cocoa content on its own conveys – when referring to a sweet [aka dark] chocolate – is about how much sugar a recipe contains, and even then it’s only an approximation in most cases. In fact, a dark [sic] chocolate is likely to have more sugar in it than a milk chocolate of the same percentage because, in a milk chocolate, milk replaces sugar and lactose is less sweet than sucrose.

@Keith_Ayoob – Chef Torres is right about paying close attention to the refined sugar content of a chocolate.

The fact that there are healthy chemicals in chocolate is a bonus, but what I think we need to be more concerned about chocolate’s weaponization as a refined sugar delivery vehicle.

Note: My current favorite dark milk chocolate is the Zotter 80/20 bar. It’s 80% cocoa and 20% milk. No added sugar and any sweetness comes from the lactose in the milk.

Adding cocoa butter is avoided because of a philosophical commitment to “purity” that can be explained by saying that adding cocoa butter dilutes flavor.Furthermore, most small makers do not have a butter press because they cannot afford one. Adding butter from the beans used to make the chocolate would address the issue of dilution more than adequately in my experience.

There is another issue which is the origin of the cocoa butter. If you are making a chocolate from Peruvian beans and the cocoa butter is from West African beans you are not making a true single-origin chocolate.

Thank you @DiscoverChoc for this post. It takes a little math but you can get a lot more info from the nutrition label than just the amount of calories. Another thing “70%” doesn’t tell you is how much of that percentage is cocoa mass and how much is added cocoa butter, or if any is added at all.The ingredient list will indicate if cocoa butter is added, but since cocoa butter is still considered “chocolate”, how much is added is pretty much “dealer’s choice.” I will say that among the bars I’ve tried that have no added cocoa butter, there CAN be (IMHO) a somewhat greater intensity to the taste, but since you don’t really know how much cocoa butter is added, you’re right (as usual) that there’s no consistency.

This may become more obvious in a 100% bar – still you don’t know how much cocoa butter added (for the record, I don’t mind one way or another – if I like the taste of the bar). A 100% bar that’s all cocoa mass and no butter may have a different mouth feel than one that includes cocoa butter.

I do wonder, sometimes, if adding more cocoa butter is the maker’s way of simply making the cocoa mass go farther, but I want to give the benefit of the doubt, too. It’s probably hard enough for many of them to make ends meet. 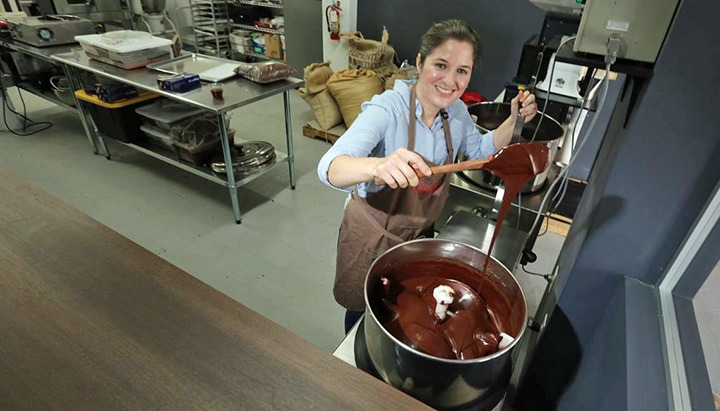 What Cocoa Bean Roaster to Consider? 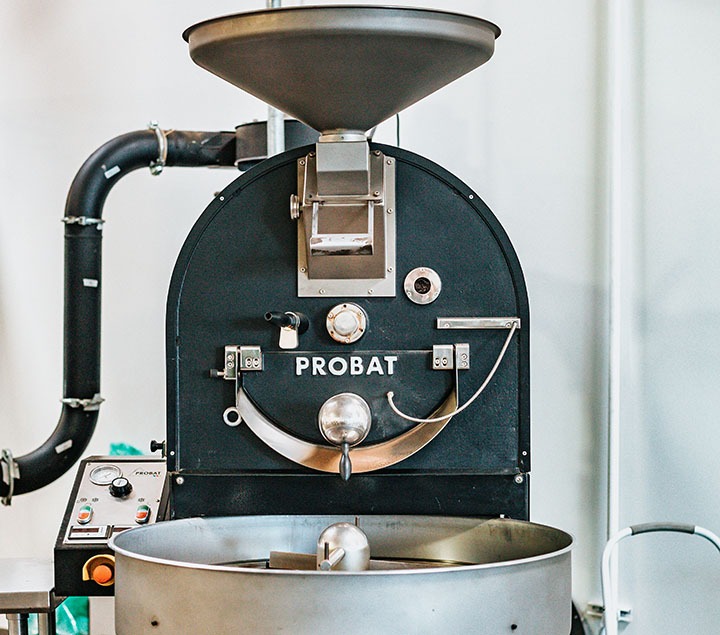