At the Academy of Chocolate conference in London in 2012, I had the great privilege of being the last speaker of the day. This enabled me to pay attention to what everybody else was saying and present a summary of what I heard in the context of my own panel presentation which was billed as, “The Global Future of Chocolate.”

After presenting a summation, I urged the audience to consider a number of calls to action. Too often at conferences like this one a great deal of good information is shared but then that information does not get disseminated after the conference is over. We all go our own separate ways and little substantive really occurs.

I presented two calls to action that are related to each other:

More to the point, *the actual manufacturing cost difference* between the $1000 bottle and the $100 (or $20 bottle) are not as great as the price differences indicate. The price differences are a result of many factors that include wine quality, origin, manufacturer, scarcity, and reviews. What this means *in practice* is that there is a lot of money in the system that can be used to pay professionals whose job it is to educate people about why it’s okay to pay $1000 for a bottle – or $100 for a bottle – when there are lots of much-more-than-adequate $10-20 bottles around.

Getting back to chocolate, most of it is mass market blah that costs $1-3 per bar. Most bars are in the $3-7 range.There is a small handful of bars that cost $10-15, and an even small number of bars that cost $20 or more at least here in the US. Some of the price differential is related to manufacturing costs – e.g., higher prices for beans in smaller quantities. However, here in the US, the largest factors contributing to high retail prices on the most expensive bars are exchange rates (the US$ is fairly weak right now), the cost of importing, and a relatively high cost of specialty foods distribution here in the US. The Bonnat Porcelana bars that cost $25 here in New York can be purchased for half that price in France.

What this means is that there is neither any need for, nor any economic value in, someone pursuing a professional certification because there is no way for anyone to generate a decent return on investment on the time and money invested in earning the certification, in part because the market does not recognize the need for it.

With a $100 chocolate bar (or, ideally, many $100 chocolate bars), the stage is set for the conditions that support professional certifications. The $100 chocolate bar makes the $10-20 bar seem not so unreasonable in price, and, thus “more affordable” for people looking to expand their taste. More importantly, the actual cost of production of a $100 bar is not 10x the cost of a $10 bar, which means that there would be more money in the system for marketing – which supports a host of other activities.

It is also very important that any $100 bar of chocolate be worth that price based on intrinsic factors that people who are knowledgeable about chocolate will agree support that price. The bar doesn’t cost $100 because it is decorated with gold leaf or contains every expensive other ingredients: the bar costs $100 because of what went in to its making.

Now, having said that, I don’t know exactly what those factors are. However, the idea was also presented at the Origin Chocolate conference in Amsterdam (also in 2012) actually for a 100 bar just four days after I proposed it by Philipp Kauffmann, one of the founders of the Original Beans chocolate company, independently of my bringing it up in London. So I am not the only one thinking this way.

Having said all that, I am writing this in the hopes of hearing from you: a) what you think of the idea, in general, and b) what you think attributes of a $100 bar might include.

I put the challenge out there to chocolate makers around the word, especially to companies with stock of older chocolates, to start exactly that sort of experimentation – to set aside a very short-term outlook and think about practices that could result in a $100 bar of chocolate that everyone agrees is worth it.

Archived Comments
@kjsboulder – To’Ak has their $350 bar, but a lot of that is tied up in the packaging.

While I think that it’s important to keep in mind my idea that it’s the chocolate itself that needs to be worth the price, where you are going with respect to flavor ingredients is a good direction to consider because it’s part of the flavor experience. Gilding the chocolate or studding the box with gems is not about the chocolate experience.

@DiscoverChoc So really expand the imagination then? A $500 bar? Introducing the 70% 2017 Ecuador Mindo Cooperative (North Slope) with Freeze Dried Chateau Lafite Rothschild 2009 Crystals!
@kjsboulder – I think one of the most important takeaways here is that the whole craft movement is too new to settle down into one definition – or a very narrow set of definitions – for what chocolate is. Rather than being a bean-to-bar manufacturer, I would preferentially view myself as someone who makes chocolate from cocoa beans and what can I make with the chocolate I make? There is a self-imposed lack of imagination in the craft market that is, in the long run IMO, in the best interests of the makers who ascribe to it.
(control-enter on a mac does not work. Just shift-enter.)

A bar maker would need to do the experiment of longer storage of nibs in Bourbon barrels though. But they need to be big enough, and curious enough, to stash 4-5 barrels of nibs in the corner of their factory for 5 years to learn new things. Most makers I know are running on edge money-wise so that is hard too. Still the three month experiments I have tasted are showing good results. (Ritual Bourbon barrel aged, for example.)

Makers with mistakes might be a great source of bars for people to store as experiments. Get the the word to someone with a too astringent batch that you will be happy to store the experiment for them and report back with bars for tasting every six months. Makes me wish I had a good cellar for storing chocolate.

I think $100 bars already exist, but the market presentation for them is what is missing. Think of a bar that is now scarce, well-thought of, beautifully made, and legendary for some feature, and you could probably get $2.50 a piece from 40 people for a tasting. That means one wealthy person might pay $100 for a whole bar, as a gift, or for friends. or for a personal tasting stash. I ate all of my candidates before I read this post, otherwise I might still have them around. However I am sure other people have bars in storage that might qualify. And I am sure some current bars will come along that have that potential.

But starting the conversation and sharing the ideas is the important part. Thank you @DiscoverChoc for starting the thread.

Consumers with coolers can take the next super astringent bar they find and age a big stack, tasting at 6 month intervals. For example the ghastly 2014 Peru Maranon would have been a great candidate. The wealthy consumer, with a good storage space, being more likely to have an interest in this.

We could keep hashing out designs and other ideas if people want to add on.
@discoverchoc yes, ofcourse, good point, i’m all more for experimenting in chocolate making 🙂 and pretty sure there is still room for evolvement
@chocoladeverkopers – I think the point is I would like to see people experiment with these ideas. We don’t know what the results will be … but I think we should try.
Interesting ideas, however it seems so (your last sentence) that with chocolate it might sadly be the other way around, in my experience the chocolate, at least sometimes, just loses tasting notes or gets a bit let pronounced while gaining not much (i might be wrong though), that is, after longer periods of storage. I think there is not that much to gain but would love to be proven wrong. And maybe there is a way to store it for longer periods which adds interesting notes (on wood, or maybe something else altogether)
Following are some of my ideas for factors that could contribute to a $100 bar:

1) When I was talking with Mikkel Friis-Holm, he mentioned that he had some chocolate that was inedibly tannic when it was made. He put it away for a couple of months and then tasted it again and the level of tannins was much lower than it was when the chocolate was made. Still inedible, but much better. He is going to taste the chocolate again several months from now to see if it’s any better. The corollary here is that there is actually very little wine that is made to be drunk in the days or weeks immediately after it’s produced. Virtually all wine made is aged to some extent- and a lot of wine is made knowing that it will take years (or decades) before the wine reaches its optimal drinking condition. Virtually all chocolate is made to consume “young.” Even when it’s got a shelf life rating of two years, it’s made to be consumed within weeks of being made. I wonder what would happen if people deliberately started making chocolate that was not going to be fit for consumption for two to five years, or more? And then selling “bar futures” on the chocolate.

2) I was talking with Sepp Schonbechler of Felchlin and he mentioned that Felchlin has quantities of the the 65% Grand Cru Maracaibo dating back to 1999. Whenever a new person comes into his department, they are tasked with re-tempering some of that chocolate which is, of course, all Form VI crystals at this point. Sepp notices some differences in taste between the 1999 “vintage” and the current “vintage” — mainly in the fact that some of the top-note aromatic notes have disappeared. At the same time, the loss of those top notes should allow other flavor notes to come forward. There are wine and spirits industry practices of vintage blending. For example, in rums, solera blending adds small amounts of aged rum to younger rums to up the “tasting age” and make a limited supply of aged rum go much farther. I wonder what the outcome would be of blending a small amount of a much older chocolate with younger versions of the same chocolate (or different chocolates)? You could get the “youth and vitality” of the newer chocolates with some of the depth and complexity of the older chocolates. 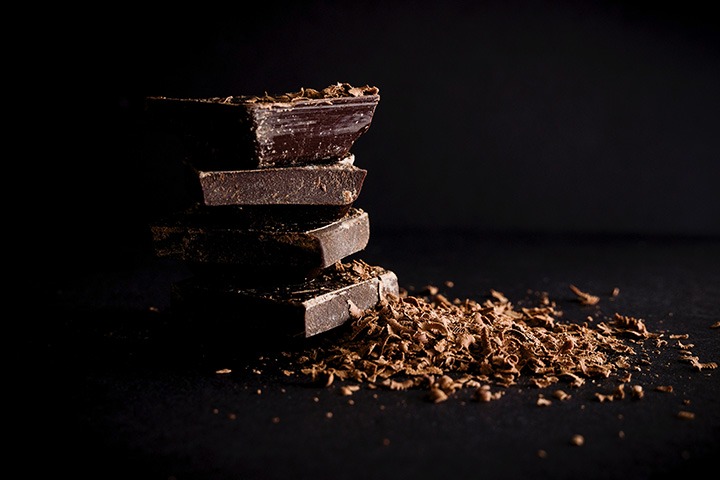 What About Raw Chocolate?

Sweet potato milkshake with Mexican-inspired chocolate drizzle. Interesting fusion that I will have…