On September 27, 2019, I attended a launch event in San Francisco where Barry-Callebaut introduced the first fruits (pun intended) of its Wholefruit chocolate innovation program to groups of journalists and chefs. I was among similar groups who participated in the 2017 Shanghai reveal of Ruby chocolate and the introduction of Hidden Persuaders in Cocoa and Chocolate at ISM in Köln in 2018.

Disclaimer: I was a guest of Barry-Callebaut (“B-C”) at this introduction as well as at the Ruby and Hidden Persuaders introductions. Transportation and accommodation expenses were paid for by B-C. At no point did anyone associated with B-C or these events ask me to alter my opinion in any way because of that financial underwriting.

What actually drives innovation is a complex question. Whatever one thinks of Ruby as a product (it is wildly popular in Japan), a core driver of the development of Ruby was the question, “Why does chocolate have to be a shade of brown?” The answer, of course, is that it doesn’t, but for thousands of years brown was the color of cocoa and chocolate.

The corresponding question front and center at the development of Wholefruit is, “Why are we (as an industry) laser-focused solely on the seeds and derivatives – liquor, nibs, butter, and powder?” Again, the answer is it does not have to be that way, there is far more to cacao than just the seeds.

Stripped to its essentials, the Wholefruit initiative looks beyond the seed to examine what can be done with the whole fruit, including the pulp, juice, and pod (aka cabosse and mazorca). This examination extends to the entire supply chain as well as the role of cacao in the food system in general.

The first Wholefruit products to be commercialized are two chocolates, called Bold and Velvety. The choice of names is counter to two dominant market trends:

One thing that is unusual about these two chocolates is they are sweetened using sugar made from cacao juice. Thus the chocolate content in both 100% is cacao-derived. (The milk, obviously, is not.)

People following the industry are probably aware of the recent announcement by Nestlé Japan of similar products – 100% cocoa chocolates sweetened with cacao sugar. One difference is that B-C is not patenting their process for making the sugar – because they can’t. They’re using a common technology to make the sugar, one that is less energy intensive than that used to make cane sugar and because there is no charcoal filtration step, cacao sugar is naturally vegan.

The Wholefruit Bold chocolate has a cocoa content of 80% according to conventional reckoning. The Wholefruit Velvety chocolate is a 60% dark-milk recipe. People who know me know that I am have been a huge, unabashed, fan of dark-milks in general since I first tasted Slitti’s Latte-Nero more than fifteen years ago, and I like this dark-milk. A lot. 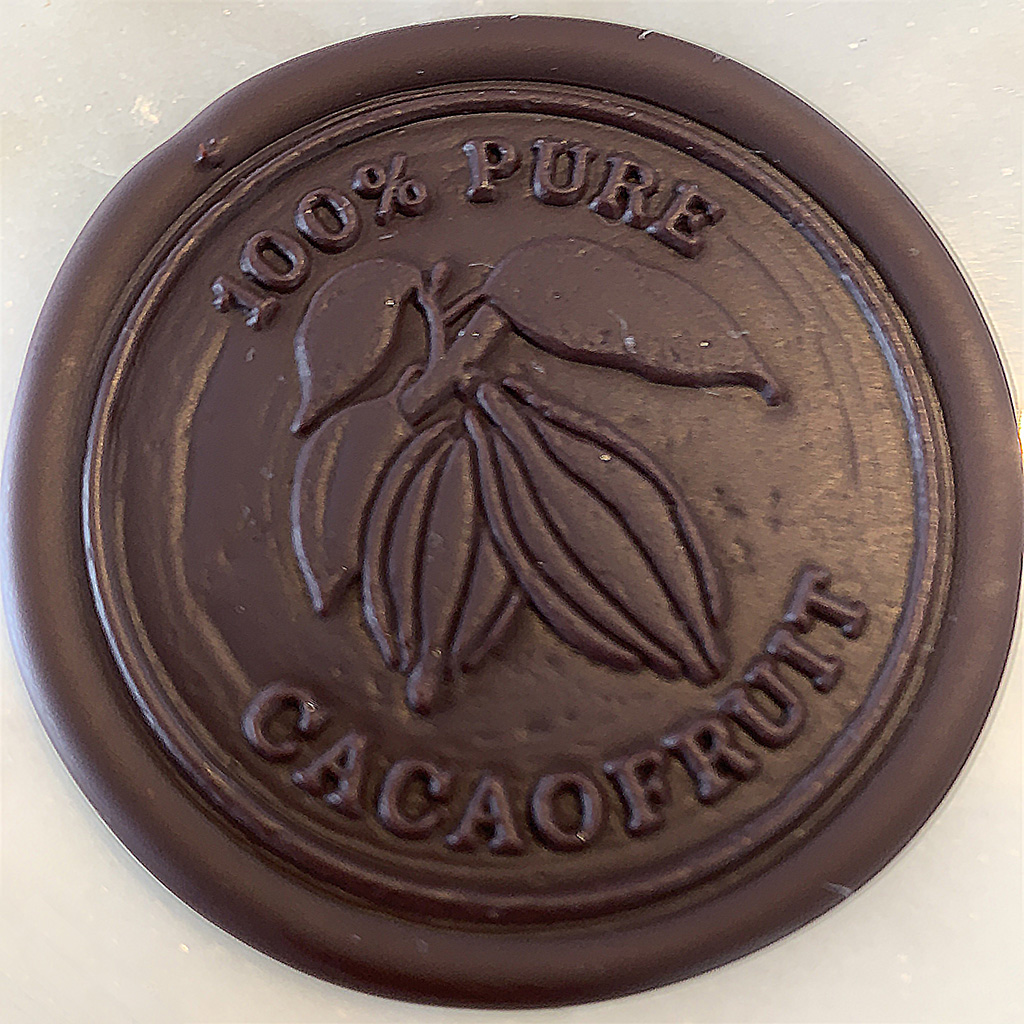 Right up front, I can tell you these are both very interesting-tasting chocolates andnot at all what one might expect from an industrial chocolate maker. There is an underlying fruitiness to both chocolates – to be expected because of the fruitiness of sweetener – as well as an essential earthy intensity that is … unexpected. And that’s a good thing in the case of these two chocolates. It’s easy for many to dismiss Ruby as little more than a sweet confection; to dismiss these two chocolates similarly is a mistake – these are serious chocolates with serious application potential in the hands of serious pastry chefs and confectioners.

Some of you may know of CaPao, a new Mondelez brand that was launched on Kickstarter. Ingredients for CaPao are produced by B-C as a part of the Wholefruit development program.

But these two chocolates are just the tip of the Wholefruit iceberg.

Also sampled at the event were cacao juice and a coarse flour/crumble made from the cacao pod itself, in both sweet and savory dishes. And that is where the Wholefruit moniker is fully revealed. This is not just about sweetening chocolate with cacao sugar. Over the course of the upcoming months and years the juice, sugar, and cacao-pod derivatives will become widely available, too. For example, the fiber extracted from the pulp during juice production will become available. Products made using this fiber can include “cacao fiber” on the label rather than alternatives such as inulin, resulting in cleaner products and cleaner label declarations.

B-C calls the flour/crumble cascara, which I think is going to be confusing because Starbucks has been using cascara to refer to the coffee cherry fruit and that’s where I think many consumers may go first when they hear this. Cascara is also not a word I have ever heard used by professionals in reference to the pod. 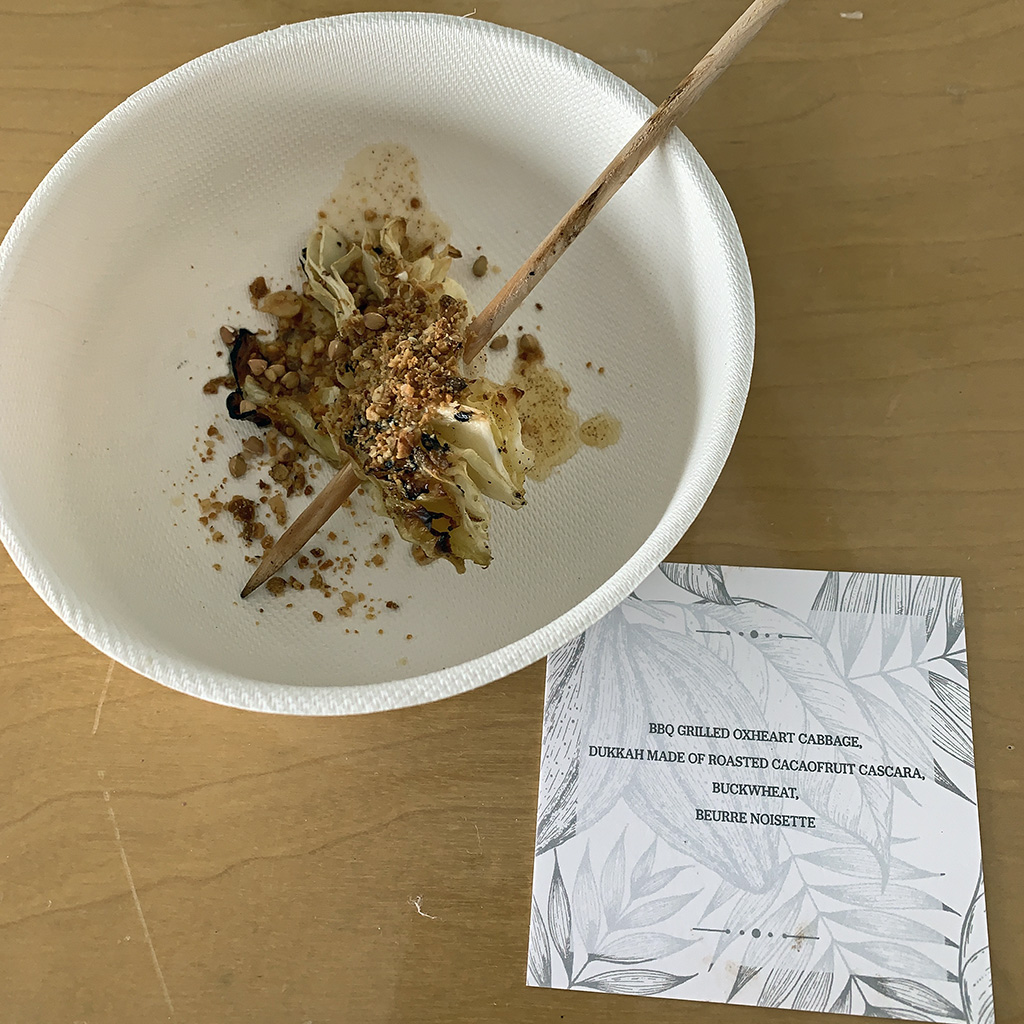 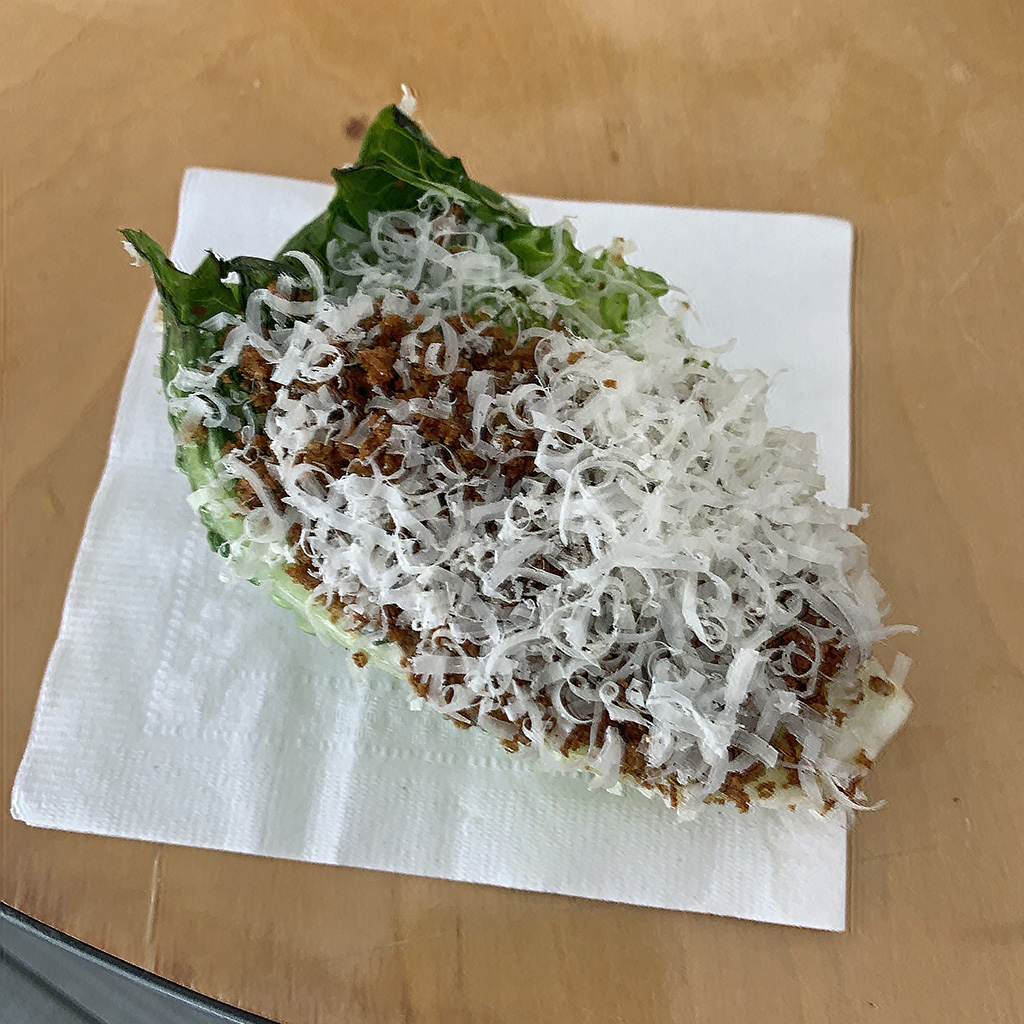 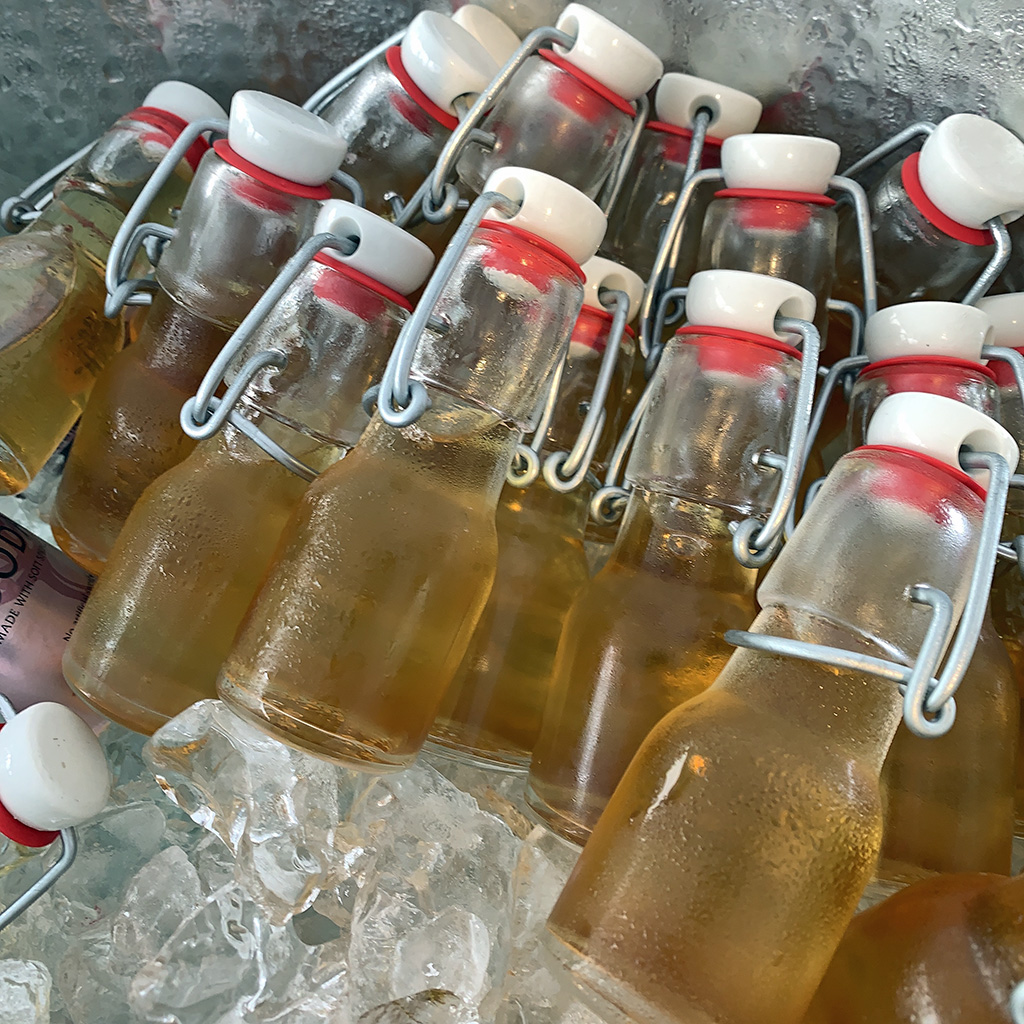 Straight From The Source

B-C is taking advantage of its sourcing acumen and scale to work to change the basic compact between itself and (for now, some of) the farmers they source from. They are investing heavily in new forms of processing infrastructure at the farm level and they are asking farmers to deliver ripe pods to the collection center, paying a premium over the dry-weight equivalent for beans, knowing they are going to be able to valorize not just the seeds but the pulp, juice, and the pods themselves in many ways. Concomitant investments in manufacturing infrastructure are being made globally to meet anticipated customer demand for Wholefruit products.

As a general rule, I am totally opposed to the idea of removing pods from the farm because they form one of the primary sources of natural fertilizer for most farmers. When cocoa is exported as an agricultural commodity what is actually being exported is the nutrition content of the soil (plus some water). If the nutrition present in the pods is not replaced degradation of the soil is the inevitable result.

Pablo Perversi, who heads up both innovation and sustainability globally for B-C told me, when I asked him about this, that they are working on a full-lifecycle program where pods go through several steps – including being burned to generate heat for roasting – before a fertilizer product is produced that is returned to farmers.

With Ruby, one business goal was for B-C to find a way to grow faster than the rest of the industry – which at $100 billion globally is growing at about 2% per year. (Specialty chocolate, of which craft chocolate is a part) is growing at about 15% annually.) By creating an entirely new category of chocolate, B-C is able to attract a new set of customers and achieve growth not possible by simple product line extensions.

With Wholefruit, B-C is creating another, wholly new, category, one they refer to as cacaofruit experiences because it’s not about chocolate as usual – it’s about creating a new class of wholefruit cacao-derived ingredients that can be used to deliver entirely new taste experiences. And deliver, they do.

At the recent Concordia Summit in NYC, held during the UN General Assembly (UNGA) earlier this week and which I attended, there was a lot of talk about how sustainability needs to be baked into corporate agendas from the top down. Going forward, companies will increasingly need to do good (not just appear to be seen to be doing good) in order to do well. At the moment, there are not many companies with the resources to do what B-C is attempting with the Wholefruit program. I firmly believe this approach will become a norm by 2030 as companies look to implement their promises with respect to the UN SDGs (Sustainable Development Goals) and as a way to improve farmer lives and livelihoods by expanding the diversity of derivative products made from cacao fruit.

B-C is all in on the Wholefruit effort as witnessed by the presence of a large number of the global management team. In addition to Pablo Perversi mentioned above, I also spoke with Antoine de Saint-Affrique, global CEO about B-C’s commitment to the project and their presence at the climate summit held during the UNGA. I had a much more extended interview with Peter Boone, CEO and President for B-C Americas. It’s clear from these interviews that this is not a flash-in-pan program. It’s part of a much larger program to address many systemic challenges facing cacao, including addressing climate change by reforesting large tracts of land with cacao in the Brazilian Amazon and elsewhere.

Updated on 9/28 and 9/30 for clarity and completeness and to correct spelling, grammar, and punctuation.

I think you wrote the article on Whole Fruit Chocolate–or perhaps it was Clay Gordon. I saw that Clay had a picture in the article and I would like to make contact with Clay. DSTUFNI

Loved your article , I have just joined the group. I’ve been a pastrychef /chocolatier for close to 40 years and i still love reading stuff about our industry and how it is evolving “hopefully for the better”. I’m just about to get involved in a total Vegan chocolate range and cocoa sugar sounds like the way forward.

You answered my concerns about what happens when the “whole fruit” is used for food production — in order for this to be truly useful and sustainable it has to include allowing farmers to keep what’s good for their soil. When is B-C rolling out these newbies in the US?

Sustainability is something that, in my world (nutrition science & ag) is nearly the ONLY topic discussed lately. It does have to come from the top and be a long-term commitment, and yes, it may impact bottom lines at first, but by definition, sustainability is all about actions that impact the long-term.

The cocoa fiber issue was particularly interesting. On products that list nutrition information, I look closely at fiber content, and in high-cocoa percentage bars the fiber content can get up there, anywhere from 6%-12%. If even more cocoa fiber is added, it’s a plus, assuming flavor is appealing.

As for dark milk chocolate, I say bring it on and high time, especially bars that are sweetened only with milk powder. The calcium content is actually reasonable — about 6-7% of the Daily Value. Not suggesting anyone eat chocolate for it’s fiber and calcium content, but between these and the other not-unhealthy properties, it’s hardly just empty calories either.

Here’s a story at Confectionery News by Anthony Myers, who was also on the trip. I am quoted extensively in the article, which is cool!

I purchased a 3 cases what I thought was low viscosity couverture 56% dark. The flavor and mouth…