Presentation topics ranged from Effects of Microclimatic Variables on the Symptoms Onset of Moniliophthora Roreri, Causal Agent of Moniliophthora Pod Rot in Cacao through Genomic Approaches for Understanding and Exploiting Natural Variation in Genetic Resistance to Climate Variation to Cocoa Diversity and Quality in Southern Mexico.

I have to admit that much of the science presented challenged my understanding at many levels. First, I am not fully versed in the vocabulary of genomics and comprehending many of the genome graphics takes a lot of concentration. While my understanding is clearer today, it’s a lot like learning any new language, and it takes regular contact and use to become fluent.

There was a special presentation on Monday evening for those who arrived early. Professor Matthew Restall and Associate Professor Amara Solari (Penn State’s experts in Maya history and art) showed the film Chocolate: Pathway to the Gods and after provided insight from a Mayanist perspective into how the film compressed history and conflated Aztec and Maya cultures, blurring important distinctions between the two, and what that means to our understanding of the uses of cacao in the two cultures.

For me, this combination of history and culture provided a foundation for thinking about the science that was going to be presented over the course of the next three days. Things got off to a great start late Tuesday morning with a tour of the Cacao Molecular Biology lab run by Drs Mark Guiltinan and Siela Maximova.

Things started early on Wednesday morning with the start of the main sessions and presentations. It’s impossible to go into detail about any of them but highlights for me connected the science to culture, history, and archaeology. Juan Carlos Motamayor spent a lot of time during his talk (Leveraging the Cacao Genome to Identify Candidate Genes Regulating Key Traits) discussing compatibility, or the ability, or lack thereof, of a tree to fertilize itself.

I had not thought about this before, but it turns out that self-compatibility is a trait that could have influenced which varieties of cacao were traded from their home on the eastern slopes of the Andes over the mountains to coastal areas before heading northward to Mesoamerica. It makes a lot of sense to transport material that can fertilize itself. Thus the South American ancestors to criollos were likely the ones selected to make the journey while auto-incompatible varieties would not have been transported.

This idea was echoed in the next session by Hugo Francisco Chavez Ayala, of the Sierra Technical Institute in Teapa, Tabasco, MX. Hugo (who coincidentally is actively involved in the Grijalva project I am working on in Tabasco), pointed out, based on his research, that cacao in Mesoamerica was most likely traded up the Pacific coast rather then across the Caribbean coast from the mouths of the Orinoco and Amazon Rivers because of the comparative difficulty of logistics due to geography. One of the factors that could have driven the trade was the stimulant chemicals present in the cacao; there are no plants with stimulants such as caffeine and theobromine native to Mesoamerica.

Hugo pointed out a likely vector for the spread of monilia in Tabasco (which only started making its presence felt a decade ago) – migrant workers from Guatemala, Honduras, Costa Rica, and elsewhere taking trains to find work in the US. It is possible to trace the spread from along railway lines where workers would have transported the moniliophthora spores on their clothes. Hugo also showed my favorite single image of the symposium, one where he overlaid important archaeological sites over Motamayor’s 2008 map showing the ten different cacao varieties and their division into the two major structure groups. It brought the point home in a way that Motamayor’s map, on its own, had not.

It was a great pleasure, during the symposium, to meet for the first time people whose names I have known through reading their research papers. Perhaps more profoundly, the symposium brought into clear focus the dedication of professionals around the world committed to understanding cacao and who are working to help ensure that it continues to exist, in abundance, for future generations. As a writer, I know that it is very important to recognize and acknowledge my sources, and this past week I learned that this community of research scientists is one that I owe a debt that is impossible to calculate.

In many respects, everything I do – and have done over the past fifteen-plus years – is dependent, on some level, on the hard work of people I met at the symposium and their colleagues around the world. I want to extend my thanks and acknowledge their invaluable work. I am humbled to be included as a member of this community and look forward to working on current and future challenges. 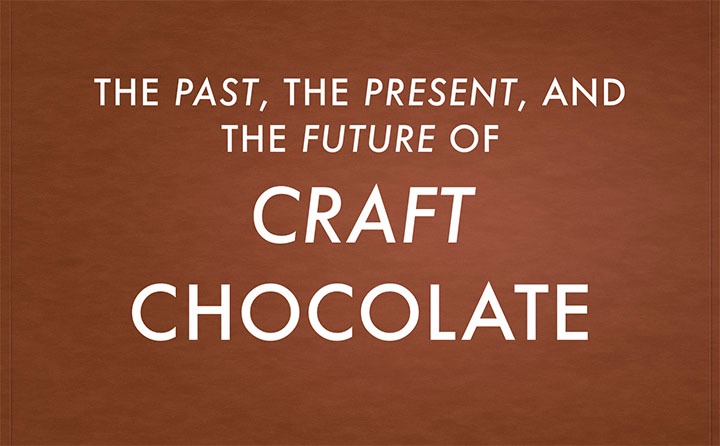 What is Craft Chocolate, Anyway?

Hi! First time on this blog! I was wondering, does anyone use a Selmi machine to temper and pour…