After spending more than $16 ($14.95 + tax for a 70gr bar) at a Williams Sonoma store in White Plains NY, and given the reputation of Chef Keller, I expected … more. A lot more.

The first disappointment came immediately upon opening the box: the bar was broken: 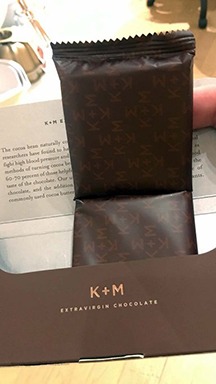 The next disappointment came when opening up the flow-wrap. The bar itself was visually damaged with wear lines down the center of the back of the bar, scuff marks all around, and chocolate flakes from the edges of the bar because the mold appears to be under-filled and the chocolate creeps up the side of the mold when when it cools. These thin lips are prone to breaking off – and they had in the bar I bought – and in riotous abandon. (That’s not a good thing.) 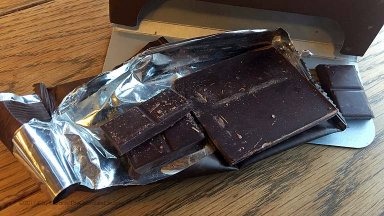 As for the “chocolate” itself (“chocolate” because the product contains olive oil listed as an ingredient so it does not meet the standard of identity set forth in CFR 21.163.123), I give it a strong Meh.

The aroma is somewhat complex but is composed mostly of a bright sweet top with mid-notes dominated by over-roasting. Paying close attention there is a faint green vegetal note – presumably from the olive oil – that would be easy to miss without multiple sniffs with your nose buried in the bar.

The snap is surprisingly sharp, given the presence of the olive oil, which I expected would have softened the bar somewhat. This extends to the texture of the chew which is also firmer than I would have expected. The melt is pretty uncomplicated but there’s a brightness to it that I don’t hate, but I don’t know that I like, either.

The taste is bland and boring, with over roasted notes predominating. There is considerable dustiness to the texture as the chocolate leaves the mouth that – finally – resolves into some stronger green vegetal notes from the olive oil. There is also some interesting and nice – but fleeting – astringency that darts around the mouth and then … it all fades away into nothing disappointingly quickly. The bottom drops out of the middle and there is literally almost nothing on the long finish. Waiting for five minutes or so reveals a sugary sweetness with a faint chocolate note in firmly in the center of the mouth above the tongue.

I don’t think that there is actually anything truly revolutionary about this “chocolate,” despite the claim on the label.

After thinking about it, the whole raison d’être of these bars is their marketing. It’s not *really* about chocolate (after all, it is *faux* chocolate). It’s the *combination* of the chocolate with the olive oil, a matching of a famous chef with a famous olive oil producer in an attempt to convince people that the way to overcome the reduction in antioxidants through processing is to use olive oil.

Given the cutesy spelling of “extravirgin” (perhaps *that* is what is revolutionary?) and the emphasis on antioxidants over everything else in the language on the label, it’s seems pretty safe to assume that this attempt is not really about the “chocolate,” a point further underscored by the fact that there is no mention of the quantity of antioxidants in or near the nutrition facts panel. 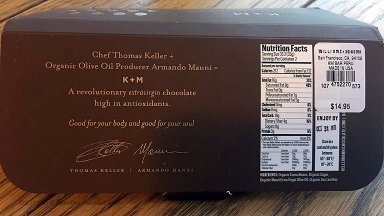 Finally, like many single-origin bars whose origin is an entire country, there is nothing about this bar that says “Peru” to me. In part, that’s because I know that Peru as an origin is host to many, many, different flavor profiles from up north in Piura and Amazonas to Marañon, Huanuco, San Martin, and Ucayalli, and down into Cusco in the south. The provenance of the beans is important from a marketing perspective *but little else*. I was not in the mood to spend an additional $16 on the Madagascar bar to see if it had any of the characteristic aromas and flavors of Madagascar – but that’s not the point of these bars: the olive oil is the point.

I don’t hate this “chocolate,” but it’s not something I would go out of my way to buy, or ask for as a gift. I would consider eating it if gifted – and there was nothing else close at hand.

It’s clear that the product is mis-labeled as chocolate. It does not conform to the standard of identity for chocolate. So, I am going to deduct a rating point and give it a 0 (zero).

Archived Comments
Here in Canada I purchased one at a Williams Sonoma store. It was $20.95 CDN. I opened the bar in the store and it had bloomed. The taste in my opinion was far from “meh” as Clay politely described it. My reaction and the reaction of my staff was that it was by and far the most disgusting chocolate bar we had ever tried. We offered pieces of it to the sales clerks. All three of them made this real sour face and said “No thanks. It tastes terrible.” I’ll take Hershey’s all day over that crap. My rating? -12
Wow. I, for one, appreciate the heads up. $16 for 70-gms is a lot. As for the standard of identity, fair game. The alternative milks are treated similarly. “Almondmilk” must be spelled as one word because “milk” must come from mammals — can’t milk an almond/cashew/soybean etc., and it’s in no way nutritionally competitive with real milk. As for K & M being “good for you”, there is quite a lot of antioxidant activity in most dark cocoa that’s non-alkalized. Sounds like there’s a lot of marketing going on here. I may try it just to find my own take on it. I have had an olive oil bar with sea salt that I did like. For $16 though, the packaging doesn’t cut it. 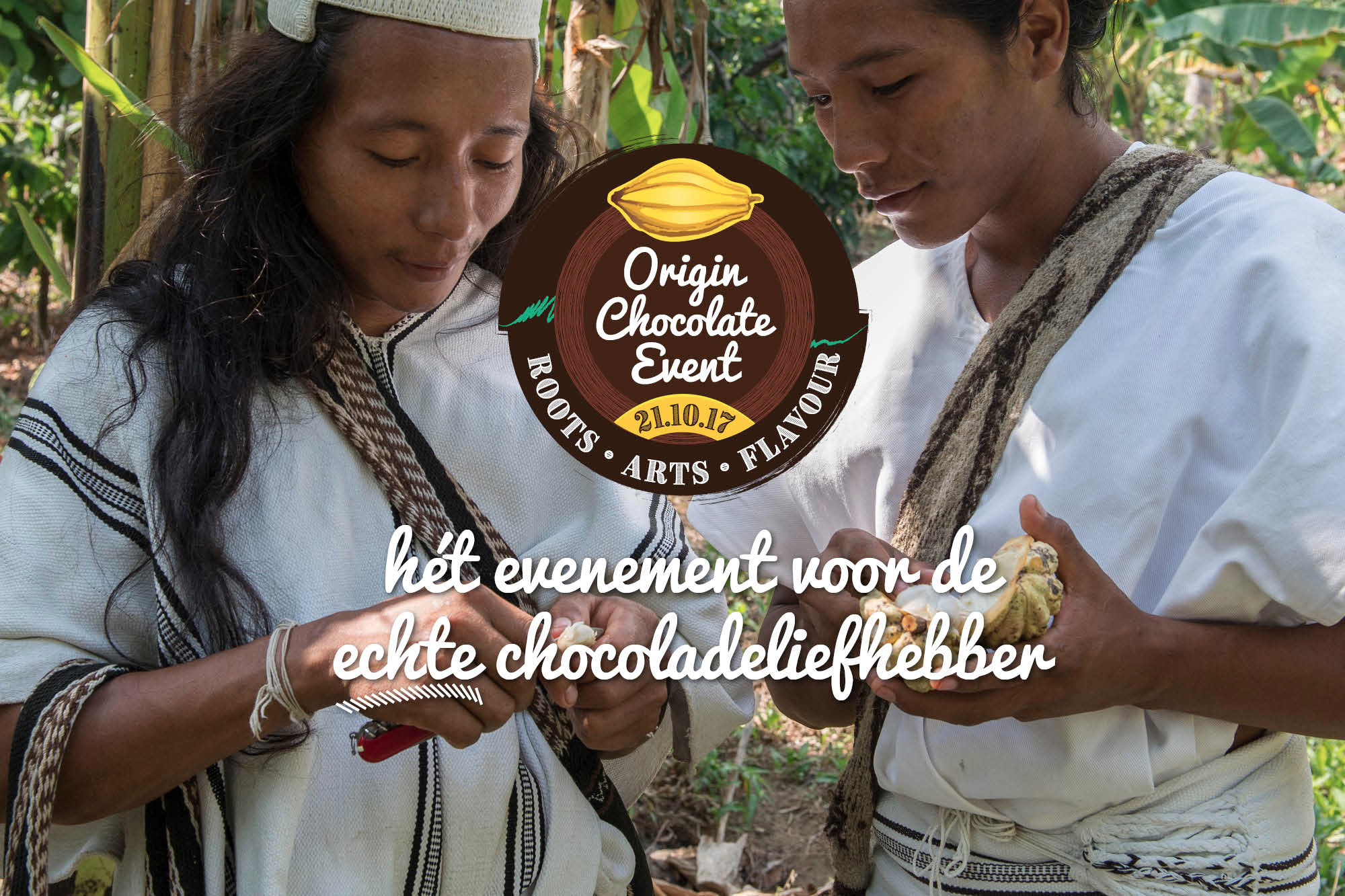 Cacao on Kauai: A Journey to the North Pole of Chocolate 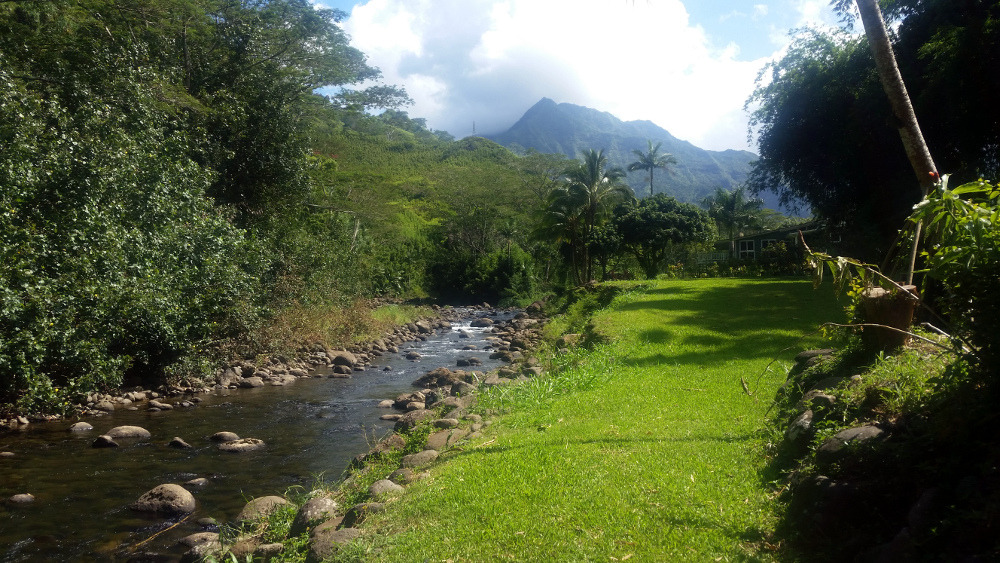