Sponsored by the Italian chocolate equipment manufacturer FBM and held at the Jean-Marie Auboine School in Las Vegas, each three-day class is designed to introduce students to a wide variety of topics in chocolate making. Both novice and experienced makers have taken part in the class.

While a great deal of technique is taught, of course, the goal is not to train students in the use of specific machines from one manufacturer. Rather, emphasis is placed on how to approach making chocolate from beans, providing an experience that bridges from theoretical to practical.

After an overview of the class and a tour of the chocolate-making facility, students are asked to sort and clean beans – usually from at least two different origins so they can see and feel firsthand the often dramatic differences between origins. Cleaning is a tedious task but by the end of this work students are familiar with many types of foreign material that can be found in beans and can identify typical defects that should be removed before roasting.

The cleaned beans are then roasted, cracked, and winnowed. 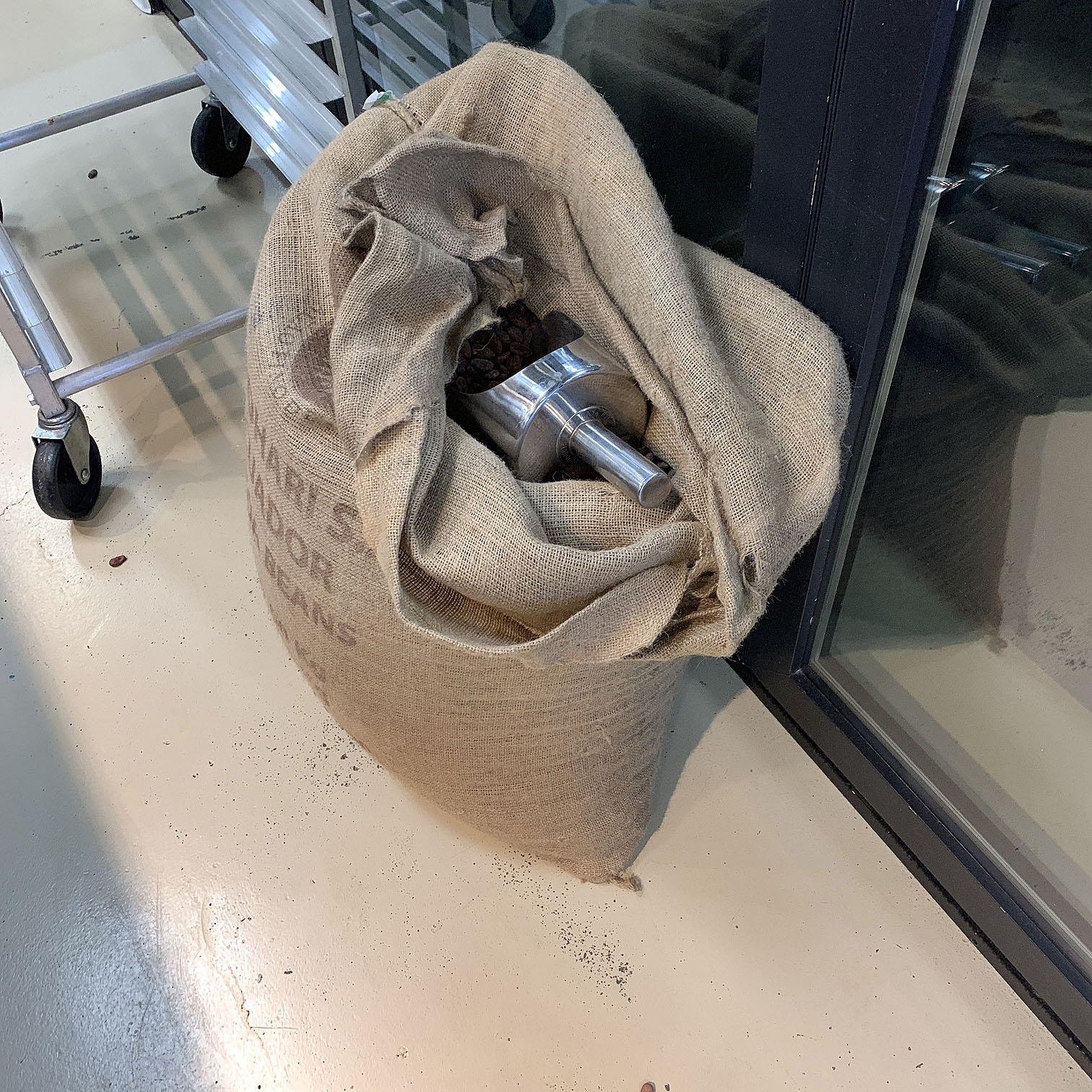 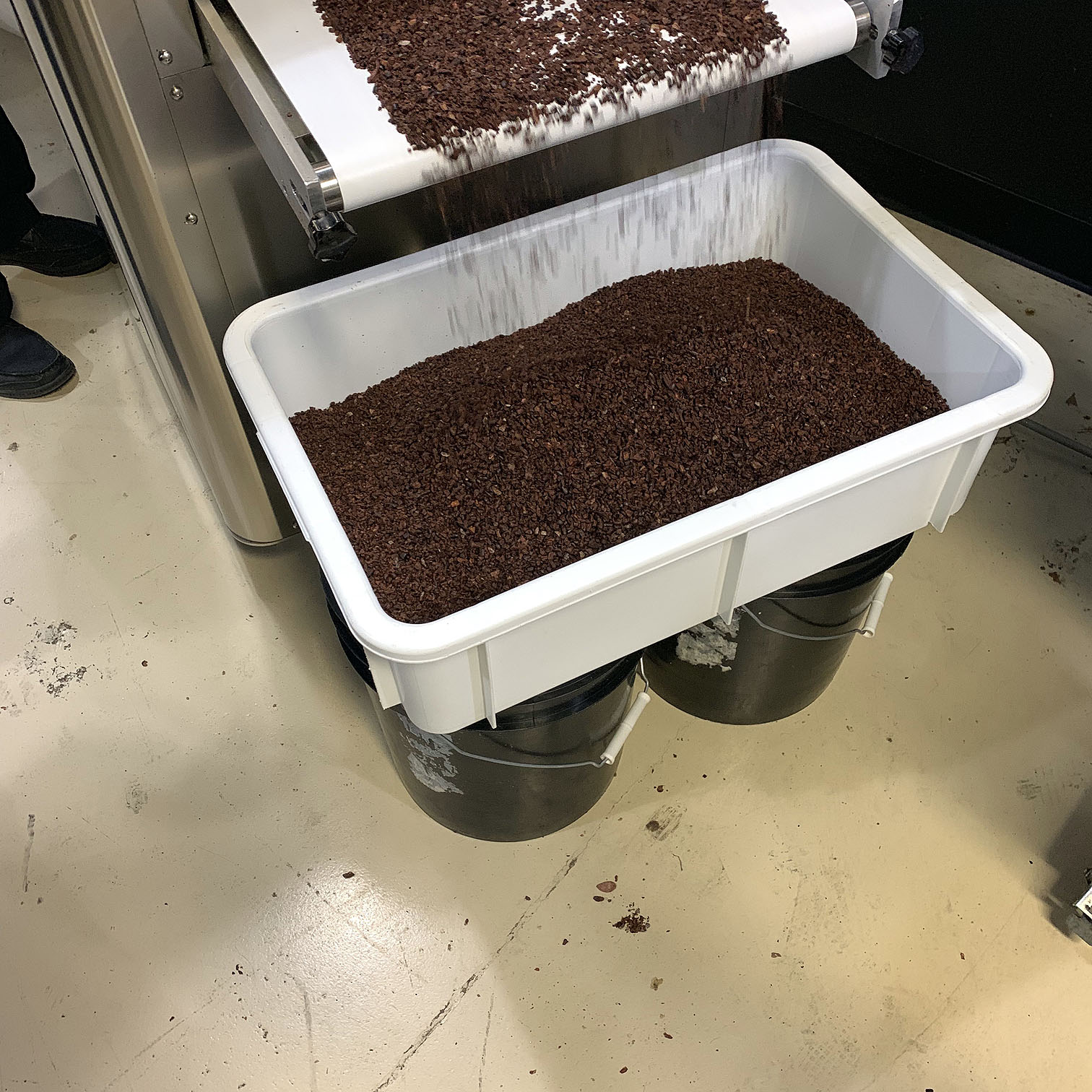 The video below shows pre-refining the roasted, cracked, and winnowed nibs in a granite three-roll mill, turning them into a paste (also called cocoa liquor or cocoa mass) before that is added to the melangeur. The pre-refining step significantly reduces the time spent in the melangeur. Typically, two or more passes through the roll mill are done.

After pre-refining, the resulting paste is put into the refiner. The video below shows putting the pre-refined nib into the antique Lehmann melangeur Jean-Marie refurbished. There is also a modern Rumbo melangeur from FBM making it possible to process two batches at the same time and compare how the two machines perform. 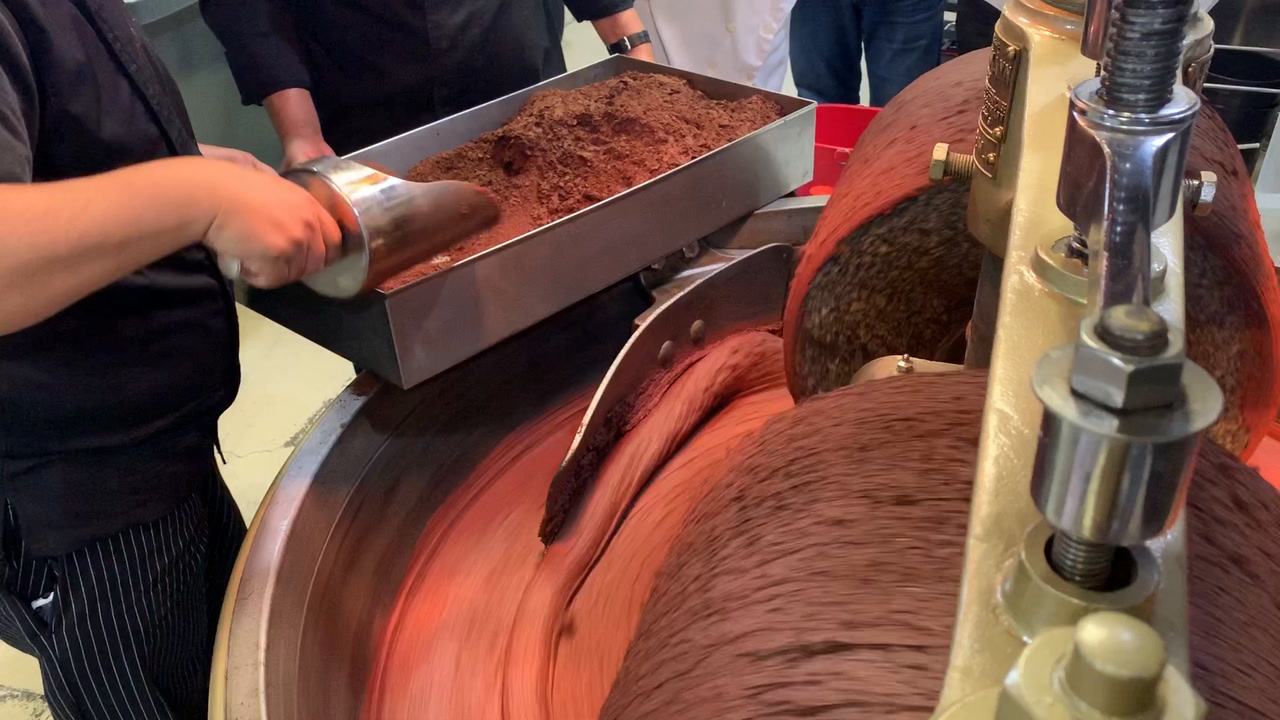 Once all of the components of the recipe are in the melangeur (paste, sugar, cocoa butter, and vanilla and lecithin for these chocolates), samples are taken at intervals to assess the progress of the batch.

The progress of the chocolate in the melangeur is evaluated with samples taken at regular intervals. 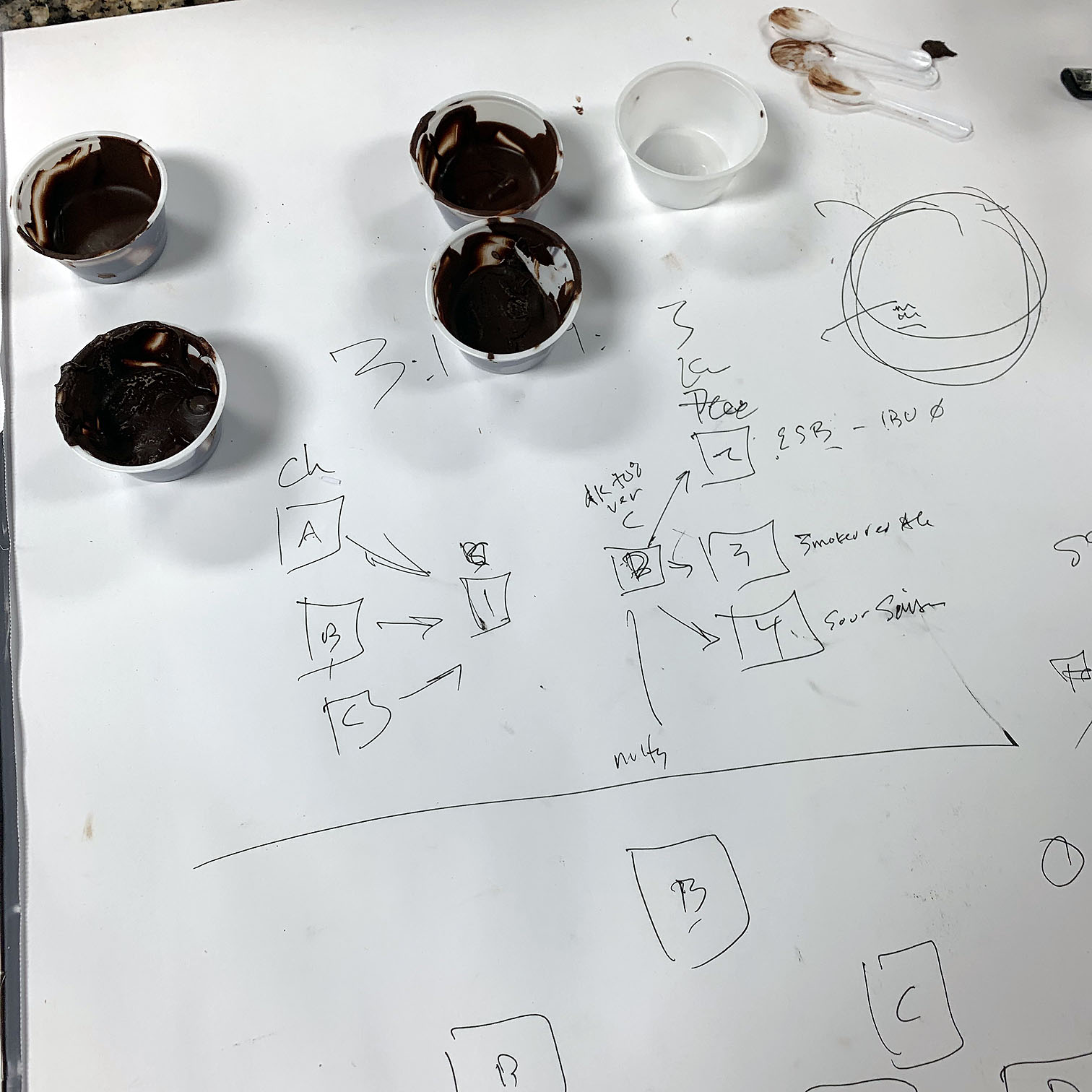 Below, another view of the Lehmann melangeur. 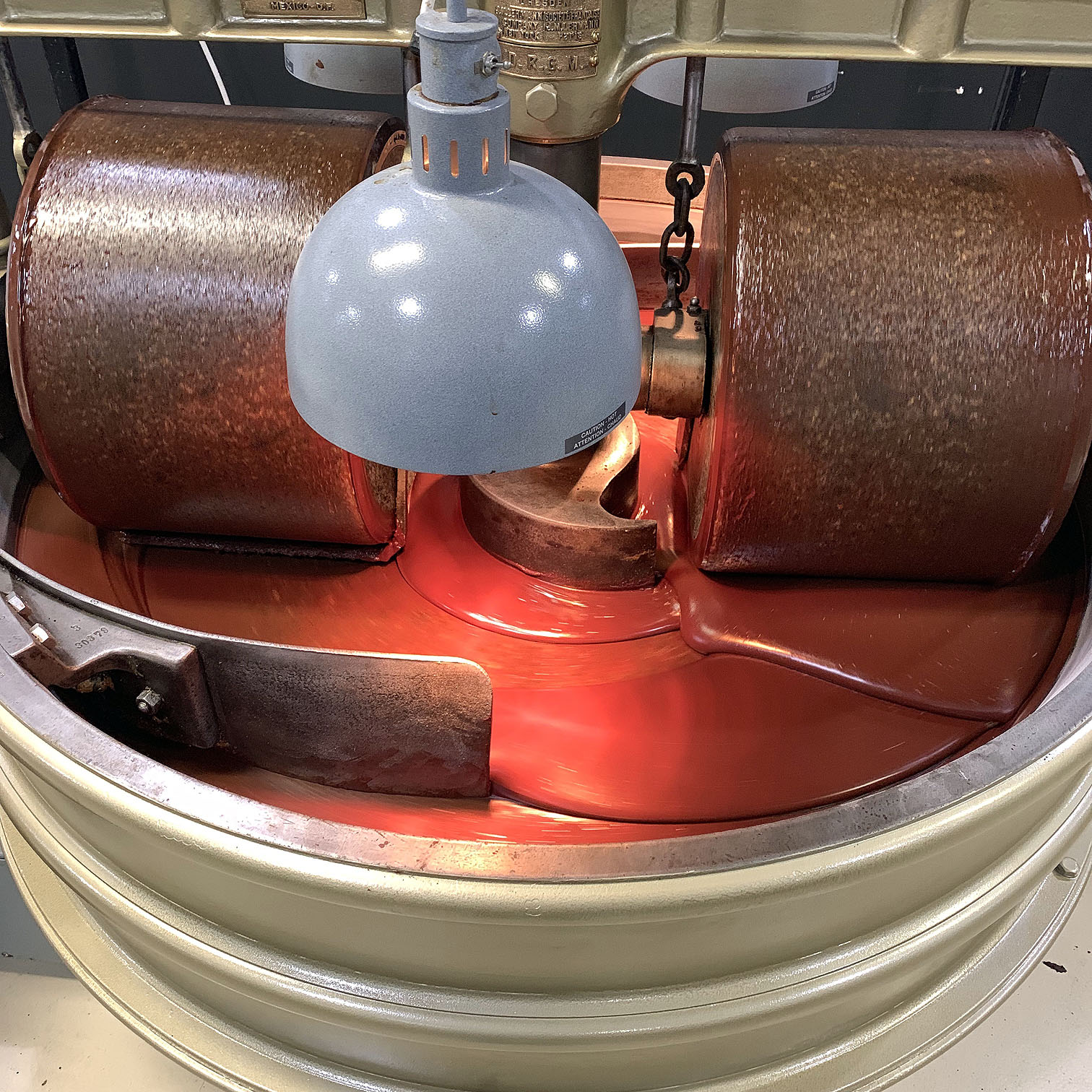 The interior of FBM’s Rumbo is shown below.

After the chocolate has been refined to the desired fineness in the melangeur (which can be measured using a micrometer or grind gage) it is removed from the melangeur and passed through a sieve to remove any large particles that were not completely refined. Sieving can also remove foreign objects that might have fallen into the chocolate. Once sieved, the chocolate is put into the conche.

FBM’s Kleego conche was the first purpose-built conche for small makers, sized to process a batch from a 65L (~35kg batch capacity) wet grinder. It’s also a very efficient mixer and melter that can directly feed a tempering machine – definitely not a single-tasker. 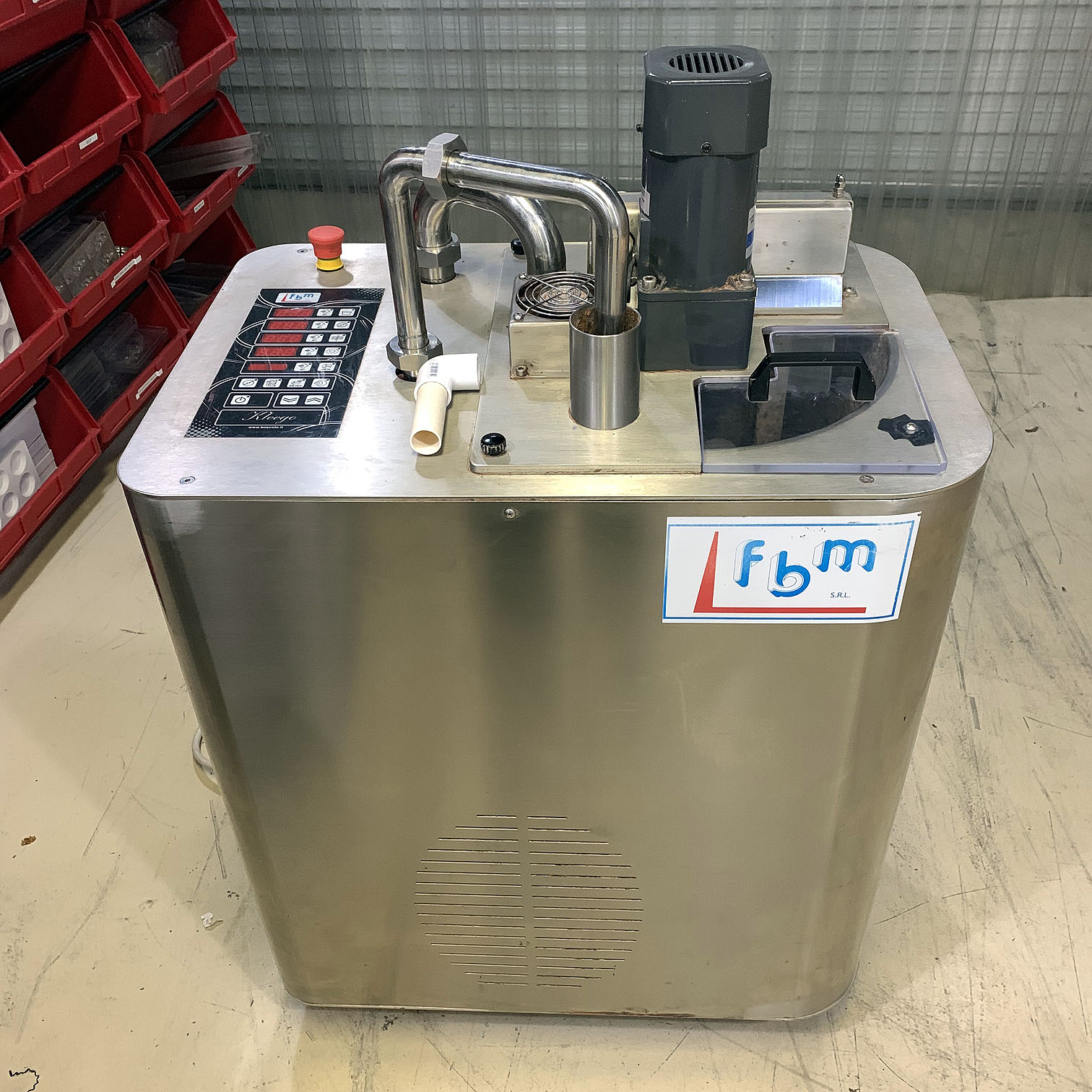 While melangeurs do conche to an extent, they are generally quite inefficient compared with purpose-built devices. The Kleego can often do in under two hours what takes days in a melangeur, offering digital control over important parameters for more consistent results.

Below are the actual conche logs for the two chocolates that were made in the class. There is an initial evaluation of the chocolate as it came out of the melangeur and then evaluations at intervals during the process. In the top row are listed the parameters that can be controlled in the Kleego: 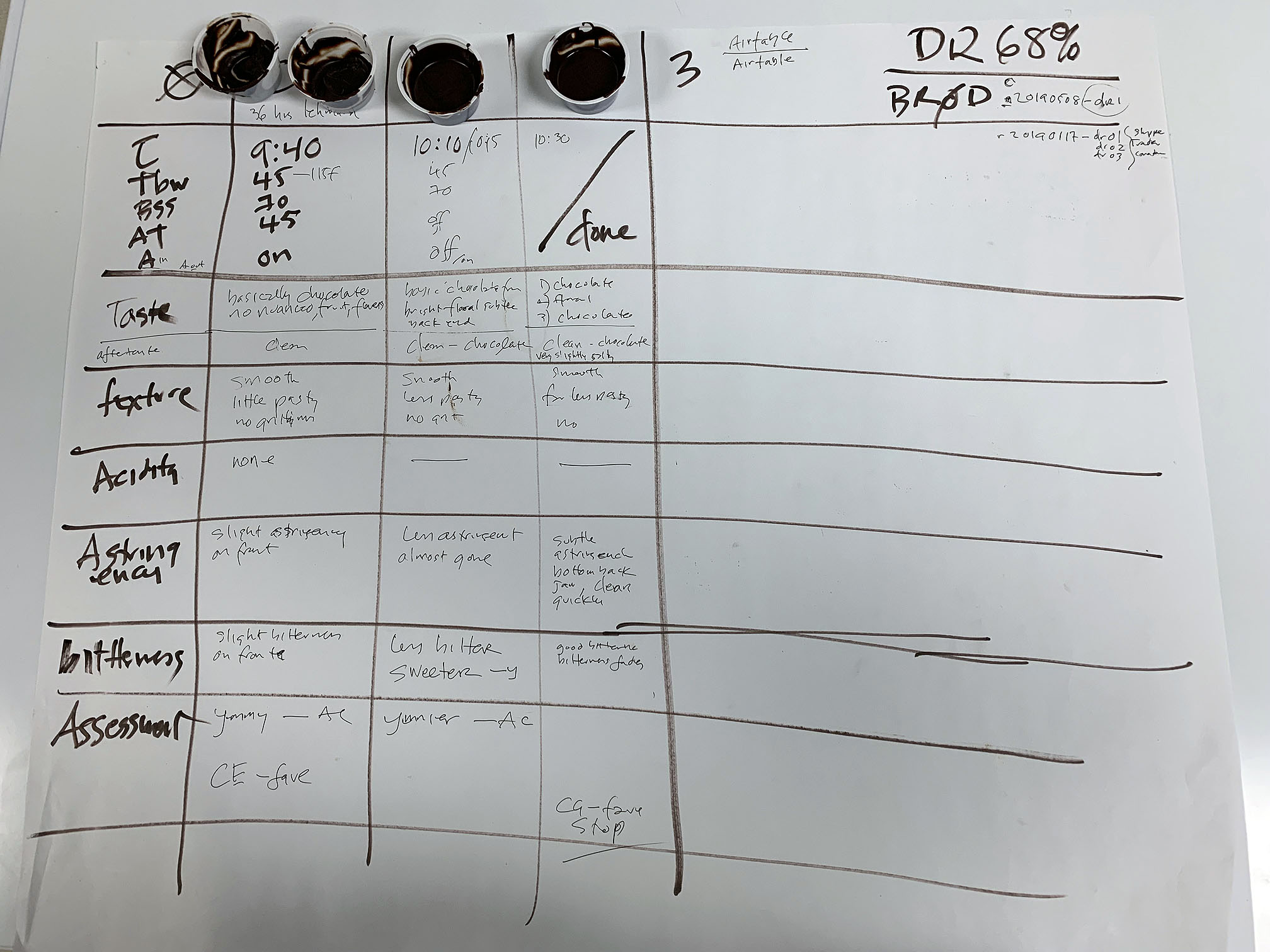 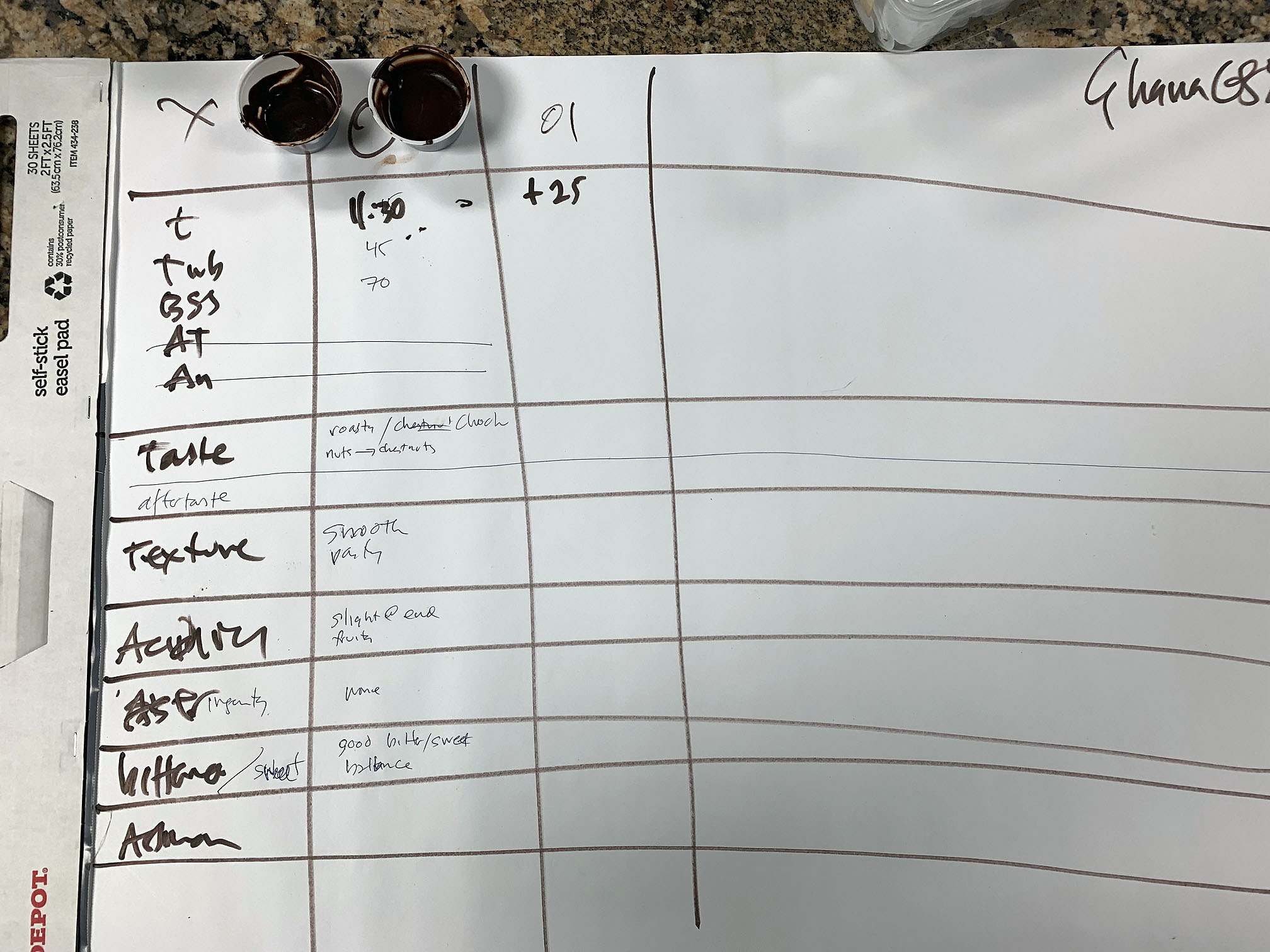 In the case of the Dominican Republic batch, the total conche time was 50 minutes. This was in part due to the fact that because of the way the class schedule went the chocolate was in the Lehmann for about 36 hours.

Once conched, the chocolate is put into a tempering machine, deposited into molds, run through a cooling tunnel, and wrapped. By the end of the third day of class, two batches of chocolate have been refined and conched, then tempered and deposited into 500gr bars and finally wrapped for students to take home with them.

During and between each step in the process shown above, time was spent answering questions (dozens and dozens) from the students. A good deal of time is spent discussing business and economic topics, packaging, ingredient sourcing, as well as talking about products that can be made with chocolate other than bars. 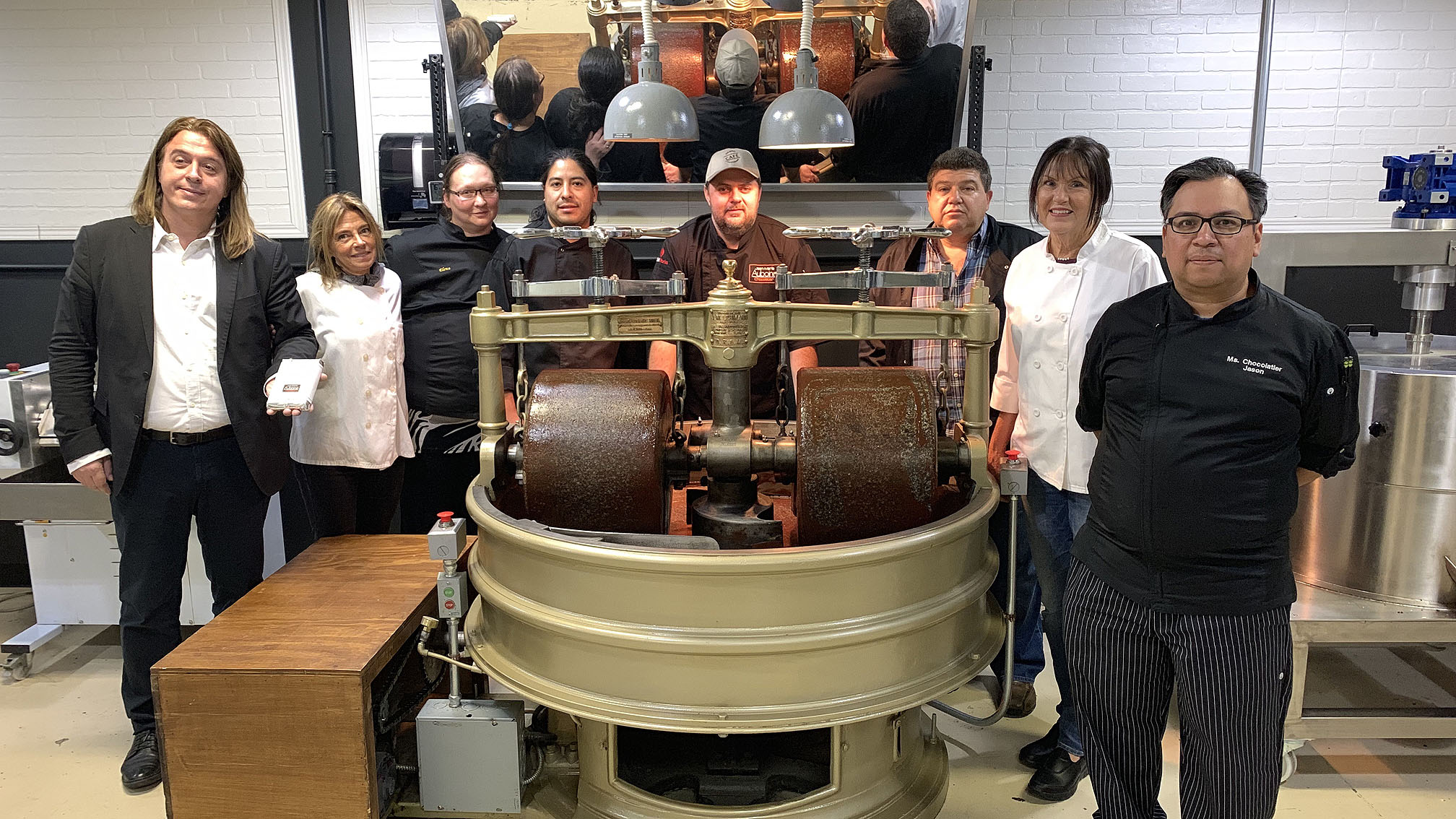 If you want to learn about upcoming classes, let me know in a comment below or DM me. The next class is September 4-6, 2019. It’s not a bean-to-bar class, but a creative and technical exploration of things to make with chocolate that are not bars, for bean-to-bar chocolate makers. 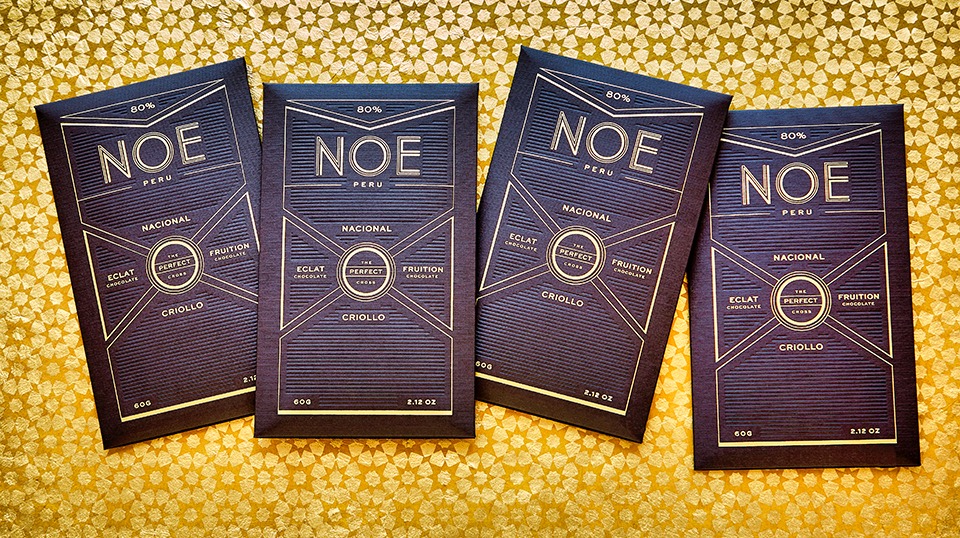