Just when you think you’ve pretty much seen it all, something comes along to let you know that you just can’t make these things up.

A Swiss company is selling a box of four chocolates for $620. That’s not a typo – six hundred and twenty dollars. What makes these chocolates special is not the chocolate, that’s plain old Felchlin Maracaibo Clasificado 65% or the Cru Sauvage 68%. No, what makes these chocolates special is that they are decorated with gold or silver leaf or “edible diamonds” and packed in velvet-lined wooden boxes each with an individually signed and numbered plaque of authenticity.

According to the site, it takes eight hours to decorate the chocolates with the gold or silver leaf, which is painstakingly applied with a small paintbrush. The “edible diamonds” (rock candy?) are apparently hand carved and polished to resemble real diamonds.

Production on your box does not begin until you place your order. When you do, it takes 2-6 weeks for your box to be completed. Wonder what shipping costs? You’re worried that shipping is going to cost too much? If you have to ask you can’t afford them.And, although the site cloaks itself in an aura of Swiss authenticity, everything is produced in Malaysia, about 15km outside of Kuala Lumpur. (Apparently it’s hard to find competent chocolate craftsmen in Switzerland these days.)

The company claims that the products are Swiss even though the everything (except the chocolate) appears to be manufactured not in Switzerland. It may also account for the fact that the chocolates are priced in both US$ and Malaysian Ringgits. But not Swiss Francs or Euros.

Obviously, this company is appealing to the super-rich for whom ostentatious consumption comes as naturally as breathing. They’re certainly not appealing to people who know anything about chocolate because we know we can buy the chocolate for a very small fraction of the cost and we can go to one of many chocolatiers who use Felchlin chocolate to buy truffles that are almost certainly as well or better made.

If $620 sounds like too much for four chocolates, you can purchase 2 for only $506. Why so little discount? They’re both shipped in the same size box. Think you can save some money by ordering silver rather than gold? You’re out of luck. Apparently the labor costs (the company claims it takes 8 hours to decorate each confection) even in Malaysia outstrip any difference in the price of gold and silver. Which is absolutely ridiculous because gold is trading (on April 15th, 2008) in the $920-$950/ounce range while silver is trading around $17-$19/ounce.

However, if $620/box does not seem like too much to pay, for a minimum order of 200 or more boxes (a mere $124,000 – that’s right one hundred twenty four thousand dollars), the company will ship your chocolate personally escorted by two master chocolatiers (at no extra cost – how generous) to ensure that it arrives safely.

Hmmmmm let’s see, at one finished decorated chocolate per worker per 8-hour shift, it takes four chocolatier/decorator-shifts to produce one box. So, if there are only four chocolatier/decorators on staff, they can produce one box per day which means that your 200 box order will take 7 months to produce, by which time the first chocolates to be decorated will be well past their prime. Let’s be a little charitable for the moment and give them a little benefit of the doubt. Let’s say that your 200 box order is going to take six weeks because it takes that long to produce the boxes. If they delay the production of the chocolate until the last week – they do want it to be fresh after all – that means they need 800 chocolatier/decorator shifts. To finish the production in five work days assuming two shifts per day, they need to have 80 chocolatier/decorators on staff (80x2x5=800).

No wonder the factory is in a country where labor is dirt cheap. There is no way a company operating in Switzerland could possibly afford such ridiculously low productivity. Even if we cut them a break and say that they are exaggerating just a wee bit and it really only takes four hours to decorate each chocolate … well, let me just say that it’s hard for me to comprehend (or condone) the profit margins in this.I am curious to see the presentation in person as well as taste the chocolates (with or without the gold). But I am not curious enough that I am willing to shell out over $500 for the “privilege” of doing so.

Decoding those pesky PLUs 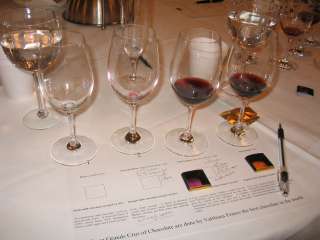