Originally scheduled for November 7th and 8th, the UnConference, a prologue to the Northwest Chocolate Festival (November 9-10) in Seattle, has been canceled for 2019. According to an email from the organizers, the event was called off due to poor ticket sales. With fewer than 60 days before the start of the UnConference ticket sales stood at a grand total of 6 (six). In past years, the event has been wildly popular and sold out well in advance. The UnConference is being replaced by a one-day event call Trade Secrets: to be held on Friday the 8th. For more information, visit the NW Chocolate Festival website.

My personal feeling is that show fatigue is (finally) beginning to set in.

There was the very successful Dallas Chocolate Festival the weekend after Labor Day weekend. This was followed by the anything-but Big Chocolate Show in Queens, NYC two weekends later. Heading into the last quarter of 2019 there is the World Cocoa and Chocolate Expo in Trinidad and Tobago (this weekend, Oct 4-5), the New England Chocolate Festival (Oct 12), the World Cocoa Foundation partner meeting in Berlin (Oct 23-24), and the Salon du Chocolat in Paris (Oct 30 – Nov 3). These are followed by the return of the Salon du Chocolat to New York (Nov 15-17) and the NW Chocolate Festival itself (Nov 9-10), ending with the Festival del Chocolate in Tabasco, MX – all before Thanksgiving Thursday here in the US. And this list does not include the many smaller regional shows and national and international shows between now and Christmas.

Saturday: Chocolate Not Drugs the Future of Bitcoin Commerce [?]

LONDON, Sept. 17, 2019 /PRNewswire/ — “Online Blockchain plc (OBC.L), the leading UK-listed blockchain company, has launched into beta test Mooningmarket.com – a Bitcoin-only buying and selling platform. Three days after the stealth mode open beta test went live, the site recorded its first purchase: a 200g packet of Arnott’s Tim Tam. The buyer of the Australian-brand chocolate biscuits was based in the US and paid 0.00048446 BTC.”

Could this be the beginning of a new dark (chocolate) web?

The woman has put her fiancé on blast for a move that’s been described as “break-up material” — but some are convinced it’s a genius idea. 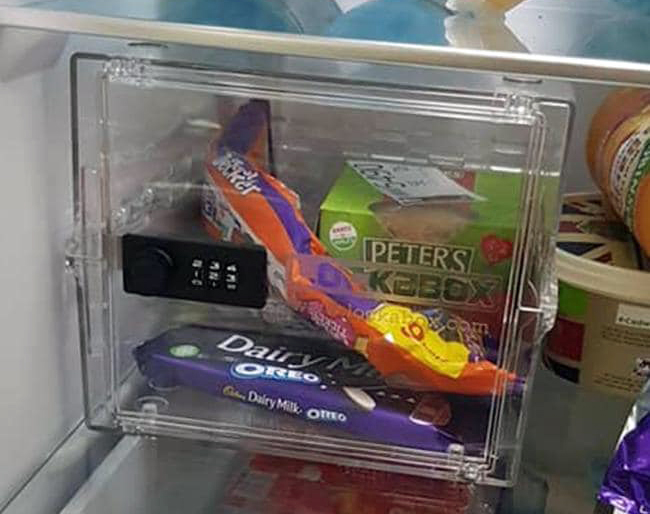 I can see both sides of this controversy while at the same time pointing out that storing chocolate in the fridge without protection from odors or humidity is definitely not a genius idea.

I am also highly amused that there is a company that actually manufctures and sells these transparent in-fridge safes.

Monday: A former PA chocolate factory transforms into a place to live, stay, and eat

A more than 50,000-square-foot hotel, a small food hall and a restaurant have opened at the former Wilbur Chocolate plant on North Front Street in Lititz, PA. The company behind the hotel conversion reportedly retained as much as they possibly could from the old beams and columns from the former chocolate factory. Other items that were saved from the former factory included original Souchard [sic – Suchard?]machines, vintage chocolate grinding machines with two giant revolving granite rollers on top of a revolving granite slab. The Souchard machines were used as sculptural interest in the courtyard of the hotel. Fire doors from the factory will be used as art in the condominiums and hotel, and one of the large gears used in the machinery was used to create a coffee table in the lounge. Throughout the hotel, guests will see artwork featuring images and signage of the original factory.

While I am happy to read that materials from chocolate factory will form a lare part of the decor of the complex, I was disappointed to discover that not one of the companies listed as early commercial tenants has anything to do with chocolate.

Tuesday: A chocolate-making robot is preparing to make world’s best sweets from your kitchen counter

Several millions of dollars and years of R&D have been invested – but there is no firm launch date (next year) and no price.

It is not a robot that makes sweets.

In actuality, this is a machine that makes chocolate from nibs (it’s a ball mill) in small quantities (a pound or less). As a uni-tasker, this machine runs the risk, like so many other machines of its type (think ice cream machine), of being a one-and done and then put away and used maybe once or twice a year.

Are these going to be the world’s best chocolates? Probably not.

I can see an avenue for adoption by serious home hobbyists and there is some serious money and advice behind this. It’s not going to be a tool for small chocolate makers to get into business as production is just too small, especially compared to cost. It may enjoy a niche among enthusiasts who look to small wet grinders as too much work. I don’t think it will cannibalize sales of small makers too much, just as getting home brewing kit does not reduce the amount of beer people buy – it does change what they buy, and this may be the most important aspect of the introduction.

“Ghana and Ivory Coast, the world’s top cocoa producers, are looking at introducing a cocoa production ceiling to support global prices and discourage overproduction, the countries’ industry regulators said on Wednesday. The move comes after the West African nations, who produce two-thirds of the world’s cocoa, imposed a fixed “living income differential (LID)” or premium of $400 a tonne in July on all cocoa sales for the 2020/21 season.”

More from the article, “Speaking on how the West African nations would implement a production cap in practice, [director general of Ivory Coast’s Conseil Cafe Cacao (CCC), Brahima Yves] Kone said Ivory Coast had begun mapping and registering the country’s farmers, and should complete the project by 2020. We’ll have all the plantations, all the locations (mapped). No one will enter the sector without permission. We need to be very harsh otherwise we’ll have an explosion (of production),” he said.

Clif Bar sells a “White Chocolate Macadamia Nut” bar that apparently doesn’t have any white chocolate in it. Is that misleading? At least according to the United States District Court for the Northern District of California, it’s not. Here’s why. The packaging for the bar features the familar rock climbing scene, along with the statements “nutrition for sustained energy,” “made with organic rolled oats,” and “natural flavors.” The plaintiff sued under New York and California law, alleging that she was misled into buying the bar because she thought it had white chocolate in it, when in fact, it did not. Clif Bar moved to dismiss, and the court granted the motion. The court pointed to the fact that the ingredient list on the packaging didn’t list “white chocolate” as an ingredient. The court also heavily relied on the fact that the phrase “natural flavors” — which appears directly under “white chocolate macadamia nut” — “may serve to show the characterizing taste of white chocolate and macadamia nut is from flavor rather than the real ingredient.” Because of those factors, the court held that no reasonable consumer would be misled.

Lacking any actual white chocolate listed as an ingredient I would prefer the label explicitly say “White Chocolate-Flavored.” While Clif may be legally in the clear on this point I would expect more from them as a company given their “reputation” (now tarnished and diminished in my mind) in the market.

Friday: Interview: “Why is everyone concerned about cocoa production and not consumption?”

“As the cocoa market continues to digest the potential effects of a minimum cocoa price, Ghana’s Cocoa Board (Cocobod) CEO, Joseph Boahen Aidoo, insists that production shouldn’t be targeted as the issue, but rather demand should be stimulated instead in order to balance the market.”

I agree in part with the above statement. Demand cannot be stimulated instead of production, it is in addition to production. We saw this happen in Perú when years of official government policy (aided and abetted by the US via development support funded by USAID) saw a huge uptick in production (mostly CCN51) without any thought put into who was going to buy the cocoa. The challenges are more difficult in West Africa because of the scale of production as well as government control over production through agencies like Cocobod.

For at least the last 18 months I have been talking about the need to add sustainable markets and resilience to any discussions about sustainability in the cocoa/chocolate supply chain. Without customers who are willing to pay for the work that needs to be done to produce cocoa sustainably, what’s the point? And, there needs to be more than one single approach to addressing issues: Monocultures of ideas are just as bad as monocropping.

Note: Updated on 10/02 for spelling, grammar, and to correct some dates.

In many cities, cocoa and chocolate festivals are held, which are attended by a huge number of people from different countries. This is probably the only product that everyone loves from newborns to the elderly. But still, Berlin remains one of my favorite cities; I was at a meeting of partners of the World Cocoa Fund on October 23, which was held in this beautiful place. In addition, on the site https://www.puretravel.com/blog/2020/04/24/what-is-berlin-famous-for/ you can read a lot of interesting things about the top places to visit. One of the most beautiful places for me is the Brandenburg Gate, I like to come there and think over my speech for a speech. 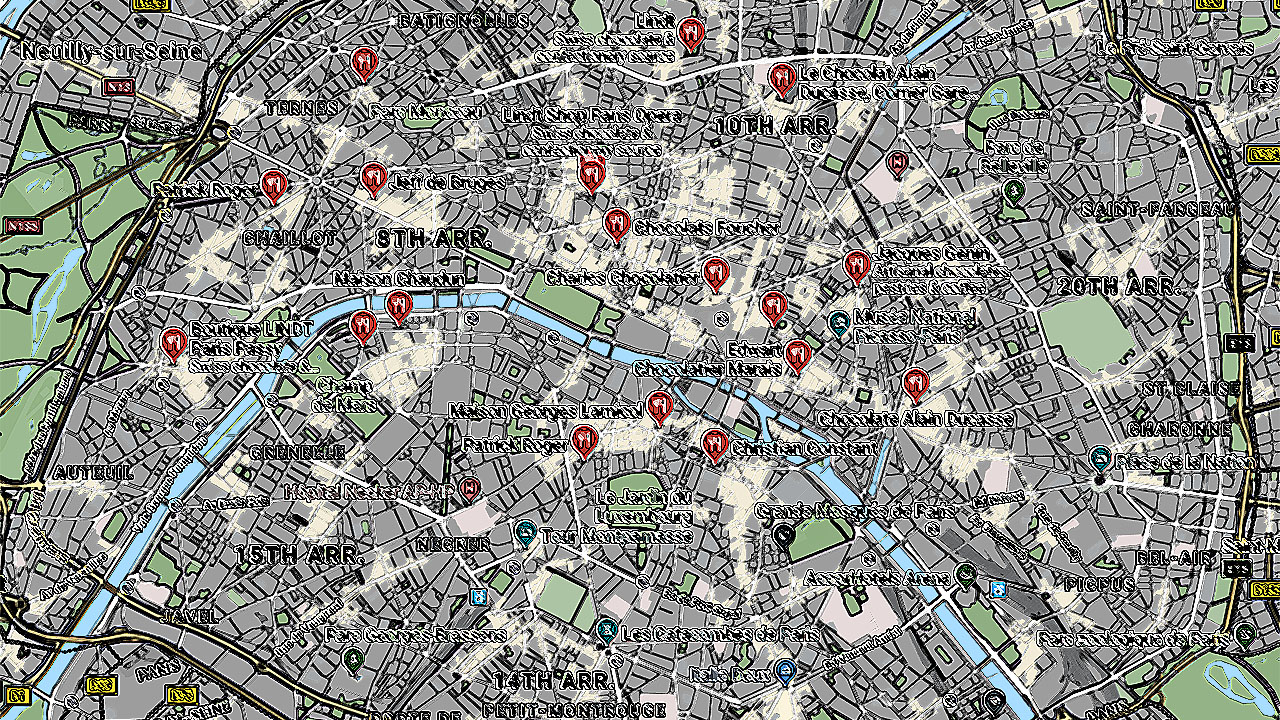