After a week away from my desk – the news is back.

A group of consumers sued the largest food company in the world [recently], accusing it of misleading customers by producing fake white chocolate while passing it off as real. The lead plaintiffs filed a class action against Nestle USA in Santa Cruz County Superior Court, saying the Swiss multinational food conglomerate falsely marketed white chocolate chips as real white chocolate when it’s actually fake white chocolate made with hydrogenated oils. [The plaintiffs] seek an order barring Nestlé from labeling and advertising the product as white chocolate and restitution on claims of unfair competition, false advertising, and violation of the California Consumers Legal Remedies Act. 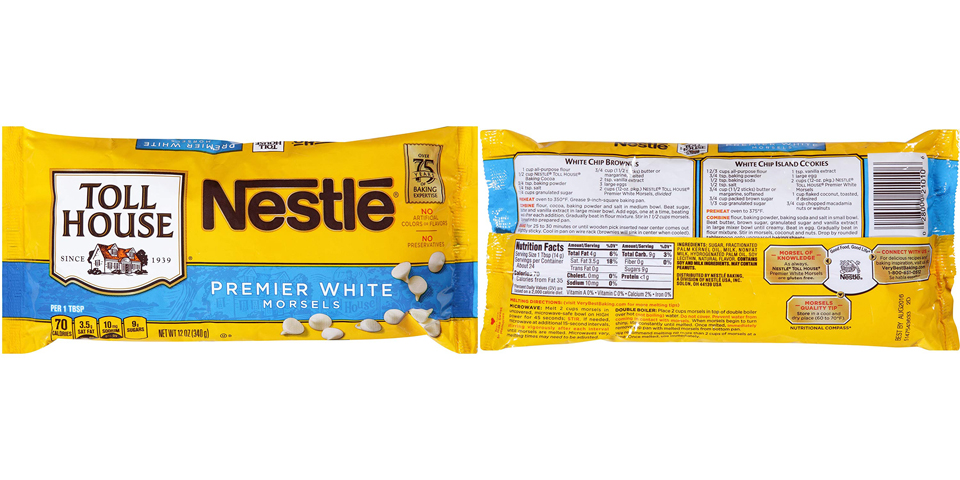 What’s important to pay attention to is that no place on the package is the word chocolate used. Just “Premier White Morsels.” The questions appear to be (and IANAL), whether or not a reasonable person would assume the package contained actual white chocolate made according to CFR 21.163.124 without the word chocolate being used on the label, and, does Nestlé rely on consumer confusion to make higher profits.

Specifically according to CFR 21.163.124, “White chocolate contains not less than 20 percent by weight of cacao fat.” As Nestlé’s Premier White Morsels contain no cocoa fat they cannot be labeled white chocolate. And they aren’t. But then, they are not labeled as white chocolate.

The article goes on to falsly claim (still) that real white chocolate is not real chocolate because it does not contain any cocoa solids. If a chocolate product is made according to the specs in CFR 21.163.124 it can legally be called “white chocolate” in the US, since 2004.. And, lecithin is not “the fatty emulsifier that holds the whole thing together.” That statement reveals a complete misunderstanding of the role of lecithin in chocolate making.

One pottery sherd at a time, archaeologist Patricia Crown has been working to unravel the mystery of chocolate and its importance to a civilization that once inhabited Chaco Canyon (New Mexico), believed to be a ceremonial and economic hub for indigenous people in what is now the American Southwest. Her discoveries over the last decade have shed more light on the widespread use of cacao across the region and the extent of early trade routes with Mesoamerica. But, she says, when it comes to Chaco, each discovery leads only to more questions that archaeologists and anthropologists need to answer.

Many people are flabbergasted to hear that cacao was traded as far north as this in pre-Hispanic times.

Just another astonishing insight into how valued cacao was to ancient peoples in the Americas.

Found at US News Civic.

“No matter where you fall in this debate, most will agree white chocolate is the most controversial of dessert items. Some chocolate-lovers are staunchly against this pale imposter, pointing out that it’s technically not chocolate. As a result, the milky byproduct tastes like the bottom of a shoe. Others argue white chocolate is a beautiful concoction, perfect for the likes of peppermint bark, cheesecakes, and fruit. Is white chocolate good or bad?”

Also, as with many things in this world there are good examples of white chocolate and disgusting examples. I would point people to El Rey’s multiple award-winning white chocolate, Icoa, which is made with undeodorized cocoa butter as an example of how good white chocolate can be. At the Dallas Chocolate Festival last month I tasted some white chocolates from Zak’s and Xocolla, both small makers pressing their own cocoa butter, that were also very good. You can even find white chocolate made with goat’s milk – Askinosie makes one with pistachio inclusions.

The keys to a good white chocolate are 1) good cocoa butter – and useing undeodorized butter which has a strong cocoa aroma and flavor helps a lot; and 2) the milk that is used – better milk means better white (and milk) chocolate.

“The United Nations Development Programme (UNDP) and the FairChain Foundation have created The Other Bar, a chocolate bar that challenges consumers to take direct action against poverty. Launching on Oct. 14, this experiment pilots a new way of doing business with producers in the developing world. Farmers only get 3 percent of the value of the cocoa used to make the chocolate sold in shops, which leads to the majority of cocoa farmers not earning living incomes. The Other Bar ensures farmers are paid prices that meet real income needs — and they receive it faster.”

From the article “Available in milk or dark chocolate, The Other Bar is made from pure, organic Ecuadorian cocoa. Each pack contains two 50-gram bars. A limited-edition 20,000 first run of The Other Bar, priced at £2.99 ($3.68), will go on sale online at www.theother.bar on Oct. 14.”

The 3% figure is one that cannot be substantiated (other studies place it as high as 6% – still too low) and may refer to industrial producers. Certainly, one impetus for the craft chocolate movement is to change the economics of chocolate to the benefit of farmers.

One way to read the statement is that the partners in the project are not fully committed to it. This is a pilot and, presumably, if sales do not meet expectations or more people prefer to reward themselves over farmers, its future is at stake. Furthermore, the partners and manufacturers do not appear to be directly rewarding the farmers. There, it’s business as usual and the actual doing good is left to the consumer. #Greenwashing, much?

So, there’s less to chocolate than meets the eye?

“Nestle Toll House Peanut Butter Chocolate Chip Monster Edible Cookie Dough is made with 100% real chocolate, 100% real peanuts, 100% real rolled oats, 100% real semi-sweet mini gems, and 100% real hydrogenated rapeseed and cottonseed oils, among other things of varying degrees of realness. […] All of that said, Nestle Toll House’s Edible Cookie Dough manages to be simultaneously tasty and lackluster. It simply doesn’t hold up to eating actual raw cookie dough – salmonella and all. I will never listen to Nestle and eat anything edible ever again.”

I have to say I love the attitude of the reviewer, perhaps best exemplified by the following lines:

“100% real hydrogenated rapeseed and cottonseed oils, among other things of varying degrees of realness.” and

“One thing they did do to it is make it look like a (poop emoji).” and

“It simply doesn’t hold up to eating actual raw cookie dough – salmonella and all. I will never listen to Nestle and eat anything edible ever again.”

Read the full review at JunkBanter.

“Shatto Milk Company’s Chocolate Milk received second place in the world designation in the Whole Chocolate Milk Class Category during the 2019 World Dairy Exposition Product Judging. This recognition comes less than a year since Shatto’s Garlic Butter was named best in show at the Missouri State fair, 1st place at the World Dairy Expo, and awarded second place at the American Cheese Societies Annual Competition in the category of flavored butters.”

From the article, ”Agric stakeholders have decried the current failure of the country to exploit the untapped $493 million potential in the cocoa industry. The National Coordinator, LUGAVO and Women Leader, All Farmers Association of Nigeria (AFAN), Halima Njobdi, in a chat with this newspaper, explained that Nigeria was not doing enough to shore up its cocoa production as well as boost its global cocoa presence. [Snip] According to [Njobdi], Nigeria is blessed with huge deposit of cocoa, which could catapult the country’s non-oil sector.”

“Nigeria is blessed with huge deposit of cocoa.”

I am sorry, no. Cocoa grows on trees in the present day. There was no cocoa in Africa millions of years ago that somehow got ‘deposited’, as oil is.

How do I run a classified ad on this site?