From the outside, a brigadeiro resembles a hand-rolled truffle, or truffe nature. It is anything but.

The center of a classic brigadeiro is made by cooking down sweetened condensed milk until it is the consistency of a chewy caramel. When cool and set it’s quite firm and can be rolled into balls which are then coated. Coatings can range from tempered chocolate to ground nuts … pretty much anything. 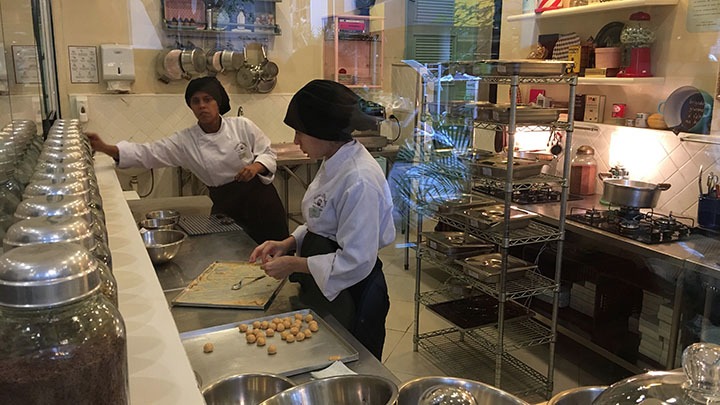 A view of the open kitchen at Maria Brigadeiro in São Paulo.

But – because the basic substance of the center is sweetened condensed milk, most brigadeiros have a tendency to be quite sweet and are often thought of more suitable for children’s birthday parties than for adults – but there is no doubt they are loved as adults, given their role in childhood.

Maria Brigadeiro was founded in 2007 to elevate the brigadeiro to the status of a gourmet candy. I had the opportunity to taste three – a dark, milk, and gianduia. 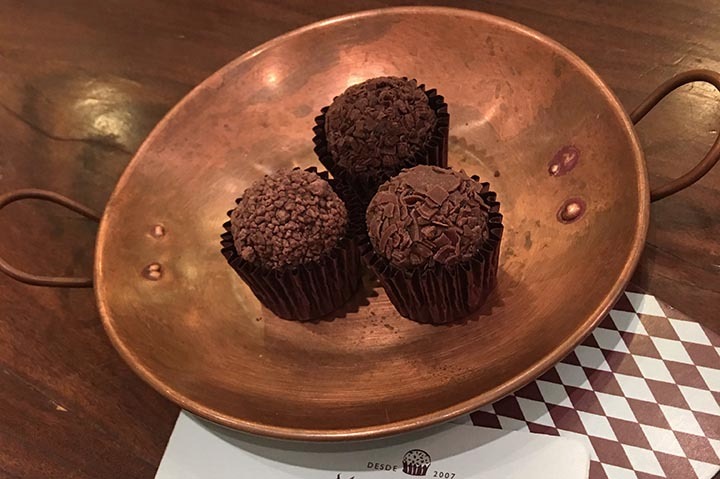 As you can see, the presentation is quite beautiful. But as someone who did not grow up on brigadeiro it was hard for me to understand what made these different – and better – from most of the other brigadeiros I had on my trip. These were still sweet and, if I wasn’t told, I would have had trouble figuring out that there were different flavors involved – just that the exterior decoration was different. Maybe that’s just me.

Shortly after leaving Maria Brigadeiro I went to the Amma store and had a selection of theirs, two of three of which which were vegan (made with fresh coconut milk made on-premises), and all had centers that were more properly ganaches than caramels.

Here’s the link to my tweet about those – which in turn should take you to Instagram. First impressions? I preferredthe Amma brigadeiros. They were less sweet and it was possible to make out the different flavors of the three. And the hot chocolate – also made with fresh coconut milk and garnished with toasted coconut shreds – ranks up there with the best I have ever had.

When in #brasil #brazil #brigadeiro !! And #hot #chocolate (naturally) … These brigadeiro at @ammachocolate in #… https://t.co/mFWfnPyMyZ pic.twitter.com/kOGcTZHySn

Archived Comments
@ZeliaF – thanks for all this wonderful background.
A comment from a Brazilian chocolate blogger: The traditional brigadeiro is made with condensed milk and chocolate powder, and it is covered with granulated chocolate (I don’t know if you have that in the USA). It has always been a “must have” in any child party, it doesn’t matter how much money you have, or don’t have. When it is made at home, not for parties, we make “brigadeiro de colher”, brigadeiro on a spoon, my favorite. We just eat it without rolling it. It is good the same way, but much less work and mess!Some years ago, something called gourmet brigadeiro was “invented”. The first one was made with Callebaut callets instead of chocolate powder. Then several new flavors were created, for example, Sicilian lemon, no chocolate included. And several brigadeiro stores popped up on the market. Every single of them using that “Belgian chocolate”, the best industrial chocolate available in Brazil. Maria Brigadeiro was one of them, but she decided to make her own bean to bar chocolate because she doesn’t want to rely her whole business in the hand of just one supplier. Wise decision.

Amma’s business is chocolates, not brigadeiro. You only buy Amma’s brigadeiros in its store in São Paulo. Covering them with nibs, the very small batches and the hands of Chef Carolina make those brigadeiros really special (and a bit different from the traditional version). That’s why you liked it better.

Brigadeiro is part of our lives, and Brazilians will always connect it with chocolate. They shouldn’t, because chocolate has become just one of many flavors of brigadeiro. I want them to see that chocolate has its own flavors, those that come from cacao. Condensed milk will always hide those special flavor notes.

So, good chocolate is one thing and good brigadeiro is another thing, far apart.

Your thoughts? Are you a big brigadeiro fan? Where did you taste your best brigadeiro ever?
Next Post

Hi, I am looking for small fruit pieces I can incorporate in my chocolates. Any idea where I can buy…