Hi all, advice on how to roast in convection/combo ovens highly appreciated!

I’m moving out of my kitchen and into a larger shop very soon and I’m researching ovens for this transition. It’s a bean-to-bar project and I will aim for 30 kg pr. week for start up.

Today I got the chance to experiment with a Zanussi Easysteam Plus 10 tray combo oven quite equal to the unox mind.maps cheftable it seems. Programable temperature curves, steam, humidity control, fan control, self clean etc. I used only 1 perforated tray with 500g beans on it.

On the first roast I programmed the oven to follow Chocolate Alchemy’s recommendations more or less:

After 5 minutes the beans started to pop in the air like popcorn. My IR thermometer read 350F on the bean surface! I continued the profile to test it but after less than 20 minutes all beans were burned and destroyed.

How could this happen? How can the oven speed up the heating process of the beans so much when set on the same start temperature as when I roast in my regular home kitchen oven? Is it the fan speed or what?

I would be super grateful for any roast/temperature curve advice for convection/combo ovens since I think this it what I will end up going for.

Archived Comments
@madsstigborg – traveling around Europe so please excuse the delays in responding.

While I have to respect everything John Nanci has done, I have to ask you the question why you’d want to roast like everyone else who follows his advice? When you’re using the same bean selection and the same equipment and the same basic roast profile and same basic recipes – how do you differentiate your product?

A short (1-2 minutes) high-temp roast to help release the shell is good, especially if you have steam. But steam forms above 100C so any temp above 100C will do the microbial kill step and puff the shells. You don’t need 170C to do that. Keep in mind that you’re interested in the bean temp not the oven temp and you are NOT interested in the surface temperature of the bean, you’re interested in the temperature of the center. An IR thermometer won’t tell you this – you need a thermometer in the mass of beans. And – something not discussed often – the temp of the beans going into the roaster needs to be known. A 5 degree +/- swing in bean temp can have a huge impact on roast.

Another thing to consider is when you start timing the roast. When you have an instrumented roaster and the right software you can understand how quickly the roaster comes to temperature after adding the beans. Do you start timing the moment you add the beans? Or do you start timing when the temperature in the mass of beans reaches the desired temperature? And 20F is too wide a window for consistent results. You might want to take a look at the roasting protocols for the Cocoa of Excellence Awards as an alternative to what John Nanci suggests.

Also – what beans? A genetic criollo or high-percentage white bean will require a different time/temp then a 100% genetic Forastero. Any general advice is just that – general. You need to arrive at something you like.

Finally – why ONE roast? There is no such thing as an “optimum” roast. The optimum roast in cocoa is a compromise. If you like a flavor at one time/temp combination you can blend it with another time/temp combination that you like. I am a fan of bring a robot when it comes to figuring out the roast for a new bean. Create a matrix of time/temp combinations and take a sample at each combination and then let everything cool down and taste all the results. There will be ones that are under-roasted and ones that are over-roasted and flavor development is non-linear. Your tasting sense is different when you are smelling the roast – which your customers do not.

So that is basicly why I have been lowering temp. during the roast. I will definitely try out your recommendations now though. Do you know how long and at what temp. to use the steam? And also do you agree with John’s overall guidelines on reaching a 212F/100C bean temp. after around 12-15 minutes and then having a desired final temp. of 250-270F in the beans?
To start high (350-even 400F) and go lower (and make shorter roasts) both in ovens and drum roasters to 1) create a more exciting roast (as opposed to slow roasting at lower temperatures), 2) make the husk release better and 3) lowering the temp. as you to not race to aggressively towards the desired final beans temp. of around 250-270F
@DiscoverChoc first off thanks so much for your advice. Your concerns regarding the high temperature profile and lowering it during the roast surprises me. I’ve so far followed John’s recommendations which I thought were kind of standard. As far as I have understood his guidlines are:
@madsstigborg – First off – 350F (176C) is really hot to be roasting beans. When I start developing a roasting profile I work in the range of 120C — 140C.

If you are using a home oven, especially if it is not a convection oven, the home oven is not as efficient as a professional oven and times and temps need to be adjusted accordingly. It appears that your pro oven is very hot and is doing a very good job at transferring heat to the beans – much better than your home oven. If you only have 500gr on a full-size sheet pan in a single layer that’s another reason why the pro oven is cooking your beans … you don’t have enough beans in the pan for that high temp.

During the first stages of roasting the heat on the surface of the bean does not change much as the water in the beans (typically 6-7%) is evaporating and cooling the exterior of the bean.

I have a basic concern about your roasting profile, and that’s why you reduce temps so often. It makes no sense to me. Also, from an oven perspective your professional oven is going to make the temperature changes a lot faster than a home oven. As we learn from cooking many other items it’s often best to start at a low temperature and then increase it rather than the other way around.

IR thermometers are good for many things but I would not trust them in this application. Instant-read digital probe thermometer inserted in the beans.

Some advice: 1) start out at 120-140C; 2) more beans (double layer completely filling the sheet pan); 3) insert the probe thermometer into the beans – ideally it records so you can xfer the temperatures to Excel and graph; 4) use steam at the beginning for a microbial kill step; 5) don’t change the temperature more than once … you are introducing way too many variables into the roasting process.

Turbofan or Unox which one is better for cocoa bean roasting?

Lonohana Chocolate: Building a better ecosystem for cacao on Oahu 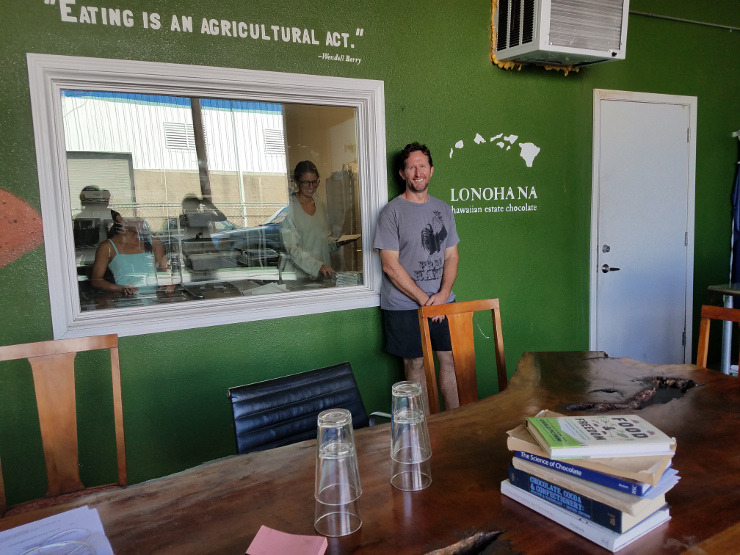